PUN vs DEL Dream11 Match Prediction: Puneri Paltan will face Dabang Delhi in what will be their second match of the Ahmedabad leg. Both teams find themselves on the opposite end of the table with Dabang Delhi KC at the top of the pile with 4 wins in 5 matches. On the contrary, Puneri Paltan have just 2 wins in 5 games, and are second from bottom. Puneri Paltan would come into the game, high on confidence, having won both of their previous encounters. With Dabang Delhi too being on the winning run, the game is expected to be an absolute cliffhanger. While Pawan Kadian has been the stand-out raider for Puneri Paltan, Amit Kumar has provided him good support in the last few games. Manjeet has also upped his game, but the biggest positive has been Girish Ernak, who has really improved and got the points for his side.
For Delhi, the raiding duo of Naveen Kumar and Chandran Ranjit have been the match-winners with good support in defence from the likes of captain Joginder Narwal, and Saeid Ghaffari, and also, Ravinder Pahal lately.

PUN vs DEL Match Timing & Match Details:
The kabaddi match between Puneri Paltan and Dabang Delhi will be played at the Eka Arena by Transtadia, Ahemdabad, on 10th August 2019 at 8:30 PM IST.

PUN vs DEL Broadcast Details:
The kabaddi match between Puneri Paltan and Dabang Delhi will be telecasted across Star Sports Network in multiple languages. Live Score updates and live stream will be available on Hotstar.

PUN vs DEL Best Players
Puneri Paltan Top Players-
Girsh Ernak: He has finally started to get a grip. He has got 14 points in the 5 games thus far and was their top scoring defender in the last two games.
Pawan Kumar Kadian: In absence of Nitin Tomar, he holds the fort for Puneri Paltan in the raiding department. He has a total of 23 points in 5 games and was among the top scorers in Pune’s last game.
Manjeet: The all-rounder has really turned up in the last few games. He has scored a total of 12 tackle points and 10 raid points in the 5 games thus far.
Dabang Delhi Top Players-
Naveen Kumar: He has been the pick of the Delhi players and has got the third highest points for a raider with 53 in 5 games, averaging over 10 points per game. He also has a tackle point to his name.
Chandran Ranjit: Though he has played second fiddle to Naveen, heh has picked-up his game whenever needed, and has played a pivotal role in Delhi’s success thus far. He has registered 29 raid points and 4 tackle points in the 5 games.
Joginder Narwal: The captain has been the solid rock at the back for Dabang Delhi. He has scored 14 tackle points in 5 games and has also assisted tackles for his teammates, and has played like a true raider. 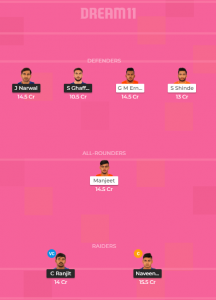 Catch all the live updates of PUN vs DEL Pro Kabaddi match, including live scores and match report. This time PUN vs DEL Dream11 Prediction will depend on the final team line-ups.