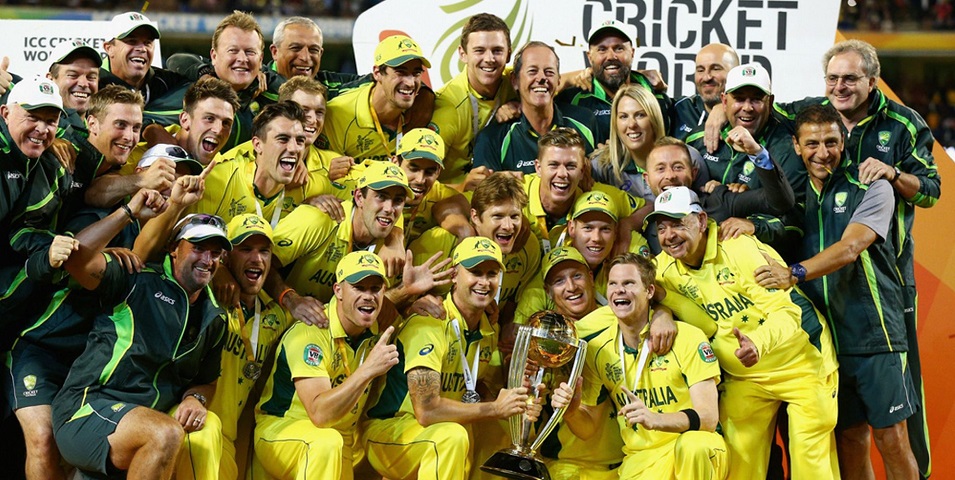 Here’s the list of the coaching staff of the Australia National Cricket Team:

Australian National Cricket Team is currently ranked number one in the list of ICC Test Championship with 296 points to their name. Australia also holds the distinction for being the most successful side in the history of Test Cricket when it comes to win-loss ratio and wins percentage.

Australia also has the best win-loss ratio amongst all other teams in One-Day Internationals. The team appeared in 952 games out of which they won 577 games and lost 332. 34 games have been ended in a tie. Australia has an unbelievable record in ICC World Cups.

Australian national Cricket Team is the only team to have won the ICC Champions Trophy twice in 2006 and 2009, thereby registering back-to-back titles.

As far as their T20 matches are concerned, Australia has played 128 T20 internationals, of which they have won 68 games and lost 55. 2 games ended in a tie, while three games produced no result.

Here’s the complete list of all the captains in T20 internationals:

Ever since winning the first-ever Test Cricket Match played in 1877 by 45 runs, Australian Cricket Team has been on the rise. The Golden Age of Australian Test Cricket started from the 1897-98 season and lasted up to the 1910-11 season. Australia Cricket Team produced some legendary cricketers between this period, who helped their country dominate Test Cricket almost over the entire period. One of the most famous players of that time was the classy batsman Victor Trumper. He was Australia’s first sporting icon and played 49 test and scored 3163 runs, both of which were records at that age. His average of 39.04 was also quite high for that time. Unfortunately, Trumper passed away in 1915 at the age of 37, putting the nation in a state of mourning.

Trumper was widely considered the greatest batsman Australia ever produced until a young man named Don Bradman appeared in the scene in the late 1920s and lit up the Australian cricketing arena before the 1930 tour of England. Sir Donald Bradman played 52 Tests for Australia and scored 6996 runs with an average of 99.94, which is considered to be the finest achievement in sports all around the world. Sir Don Bradman also played 234 First Class Cricket matches, scoring 28,067 runs, with an average of 95.14. He scored 29 Test Centuries and 117 First Class Centuries. His highest score in the test was 334, while that in First Class Cricket was 452 Not Out. Sir Donald Bradman is widely considered the greatest batsman to have ever played cricket and the Australia Cricket Team’s dominance during his era has ensured that Don Bradman is a part of the folklore at Australia. He retired in 1948, was knighted in 1949 and breathed his last in 25th February 2001.

Australia Cricket Team continued its success into the 1940s but even though success eluded them in the early 1950s, they recovered in the later part of the decade. Richie Benaud, the legendary leg spinner was instrumental in the revival, as Australia carried their success in the 1960s, which followed into 1970s. The 1980s saw a period of decline, owing to various non-cricketing issues and it was not until Allan Border arrived in the scene that the revival started. Under Border’s captaincy by 1989, after their maiden World Cup win, Australia began a phase of rebuilding, with the help of young blood like Steve and Mark Waugh, Ian Healy, Geoff Marsh, and Greg Matthews.

Australia was on the rise again and the 1990s and the early part of the 21st Century was perhaps Australia’s most successful period in Cricketing history, with the team getting a lot of recognition and gathering a near invincible appeal. One reason for this was the ability of the country to produce a series of fine captains as well as players, who were reinforced in Border’s aggressive traits. The continuous improvement within the Australian Team and their capacity of getting the perfect mix of the old and the new ensured that their success was constant. They had replaced every outgoing player with a young cricketer built in a similar mold and had managed to keep the Australian Cricketing instinct intact. It would seem that they would dominate for the unforeseeable future, however, in 2018, the ball-tampering controversy hit them very hard.

The incident occurred on 25th March 2018, when Australia was playing South Africa during the 3rd Test Match against the host country. Cameron Bancroft, Steve Smith, and David Warner were charged with ball tampering by the use of sandpaper, to gain an unfair advantage by changing the ball surface to cause the ball to reverse swing. Smith and Bancroft admitted to the tampering and they were both fined by the ICC, while Smith even got a one-match ban. Following the events, Smith and Warner were both removed from the roles of Captain and Vice-Captain of the Australia Cricket Team and were suspended for a period of 12 months. Bancroft received a suspension of 9 months. Warner was also permanently barred from any leadership role in the team while Smith and Bancroft cannot be considered for leadership ranks for 12 months after the ban. Australia Team Coach Darren Lehmann resigned from his post at the end of the 4th Test match against South Africa.

While the events ensured that Australia Cricket Team is under heavy waters, for now, they have the pedigree of winners and it will only be a matter of time before they are back to their best again.

Test Match Records & Stats: Australia is touted as the most successful team in the history of Test Cricket. The team has more than 350 Test wins to its name with a winning percentage of almost 47 percent.

Interestingly, Australia is the only side that has had two tied Test matches. The first one was played in December in 1960 against West Indies in Brisbane. The second Test match was played against India in September 1986 in Madras.

On 24 February 2002, Australia registered their largest victory in Test after defeating South Africa by an innings and 360 runs in Johannesburg.

Australia holds the record for the most consecutive wins with 16. This has been achieved twice; from October 1999 to February 2001 and from December 2005 to January 2008.

Australia shares the record for the most consecutive series victories winning 9 series from October 2005 to June 2008. This record is shared with England.

Australia’s highest total in a Test match innings was recorded in Kingston, Jamaica against the West Indies in June 1955. Australia posted 758/8 in their first innings, with five players scoring a century.

In May 1902, Australia recorded its lowest ever total in Tests. They were bowled all out for 36 while playing in a Test against England.

Australia is the only team to have lost a Test match after enforcing the follow-on. It happened for as many as three times- the first Test in the 1894–95 Ashes, the third Test of the 1981 Ashes, and the second Test in the 2000–01 Border-Gavaskar Trophy series against India.

The 2013-14 Ashes series saw Australia taking all 100 wickets on offer in the 5-match series against England. They won that series 5-0.

ODI Records and Stats: On 12th March 2006, Australia recorded their highest ever total in One-Day Internationals. They notched a massive 434-run total in 50 overs against South Africa. To everyone’s surprise, South Africa chased down that total, making it another world record total in one-day internationals.

Australia posted its lowest ever total in one-day internationals against England in 1977. They scored just 70 runs and replicate a similar performance against New Zealand in 1986.

Australia’s lowest total in a One-Day International innings is 70. This score has occurred twice; once against England in 1977 and once against New Zealand in 1986.

Australia’s largest victory in One-Day International cricket is 275 runs. This occurred against Afghanistan at the 2015 World Cup in Australia.