The 2021 edition of the Indian Premier League started on 9th April 2021  but couldn’t be completed due to a breach in a bio secure bubble and several players were detected positive with COVID-19 due to which BCCI had to call off the cash-rich league after successfully hosting 29 matches in India and now the remaining 31 matches of the tournament will be resuming in UAE across three venues which includes Dubai, Abu Dhabi, and Sharjah.

The BCCI will be ensuring that the remaining matches can be conducted in a safe and healthy environment with players, support staff, and officials follow all the rules which are kept in place by BCCI medical team. 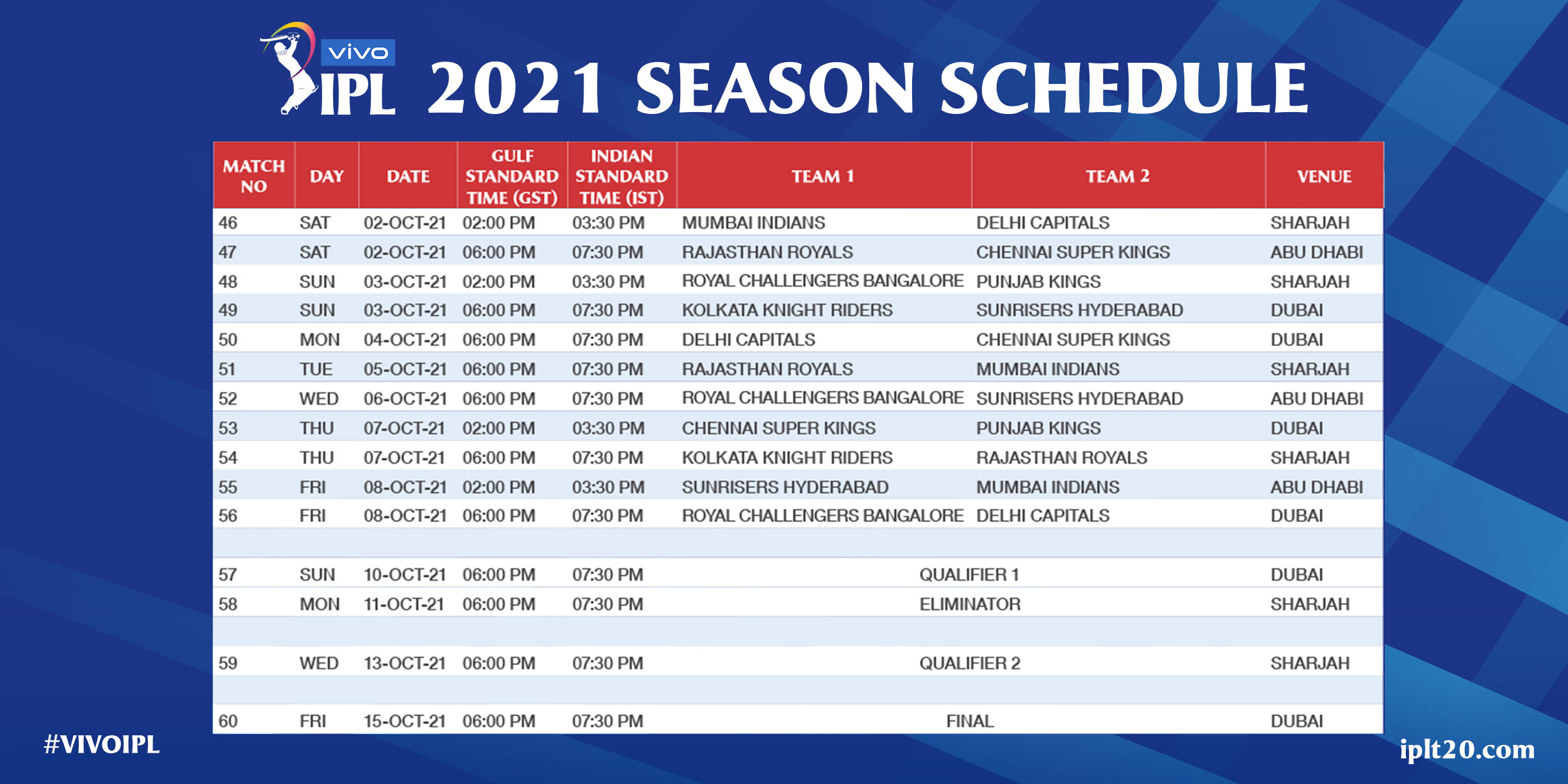 Let’s have a look at the remaining schedule in the description below where the match between arch-rivals Mumbai Indians and Chennai Super Kings will mark the resumption of the second leg of IPL 2021.

🗓️ The dates are OUT!

Get ready for the #VIVOIPL extravaganza in the UAE 🇦🇪

Last year, the IPL 2020 was originally scheduled to start from 29 March 2020 but had to be postponed due to the coronavirus pandemic and lockdown imposed in the country.

The BCCI later successfully hosted the tournament in the United Arab Emirates (UAE) between 19 September and 10 November 2020.

The record-breaking season acted as a way of entertainment for cricket fans all over the world in a time where every other sporting event was at halt. Mumbai Indians were able to successfully defend the title by defeating Delhi Capitals in a 5 wicket win in the Final of IPL 2020.

Before the much-awaited tournament starts, everyone’s eyes will be on the Player Auction that is to be conducted on 18th of February 2021 in Chennai.  There are some big players that will go under the hammer including Glenn Maxwell, Steve Smith, Mitchell Starc, Jason Roy, Karun Nair and Umesh Yadav.

It is to be noted that the BCCI will be wary of Indian team suffering from many injuries and having to play many debutants in the recent Border-Gavaskar trophy played between India and Australia. Players like Ishant Sharma and Rohit Sharma were injured in the IPL, whereas many players like Mohammed Shami, Ravichandran Ashwin, Jasprit Bumrah, Ravindra Jadeja got injured while playing in the Border-Gavaskar trophy.

The coaching staff and BCCI have been managing the workload of players and we could possibly see some of the all-format players being rested in the limited-overs leg of the India-England series that is to be played in India to monitor fitness and fatigue.

With the COVID-19 situation improving in India, BCCI is trying its best to conduct the IPL in India this year and are quite optimistic about pulling it off.

It will be interesting to see where BCCI conducts the IPL to maintain the bubble. There are rumors that the  BCCI is looking at three stadiums in Mumbai to host the league stage and possibly shift to Ahmedabad for knockouts. The proposed venues are Brabourne Stadium, Wankhede Stadium and DY Patil Sports Stadium.

If BCCI successfully hosts IPL in India, it will set a good precedent for conducting the upcoming ICC T20 World Cup in the later half of 2021 and other home tournaments including the prestigious Border-Gavaskar Trophy at home.