MUM vs GUJ Dream11 Prediction: As the tournament is slowly approaching its ending, Match no. 102 will be  played between U Mumba and Gujarat Fortunegiants. Their last clash took place in the Mumbai leg where the home team U Mumba happened to win a one sided game against the Fortunegiants as the final score card stood 32:20.

U Mumba: U Mumba’s previous match saw them end U.P. Yoddha’s unbeaten streak as they beat them with a score card of 39:26, and now the team will hope for more of the same in the match against Gujarat Fortunegiants. Their raiding department has been well-led by Abhishek Singh, who has produced Super 10s in two of the team’s last three victories. He has found able support in the form of Arjun Deshwal, who has been scoring at an average of 5.06 raid points this season and has shown the ability to absorb pressure when the team needs him the most. In the game against UP Yoddha, Abhishek Singh was the highest scorer with 11 Points in the match followed by Arjun Deswal who scored 7 Points. Defender Surinder Singh who was out of form in the last few games scored 6 Points in the match. Overall, the side looks good as they are working very hard to qualify for the play offs. If they win today’s match then their race for the play offs will be closer. While there are certain records that will be achieved by their players. Defender Sandeep Narwal is 7 tackle points away from 300 tackle points in PKL. He will become the 3rd player to reach this milestone. And raider Abhishek Singh is 13 raid points away from 100 raid points in PKL 7.

Gujarat Fortunegiants: Gujarat Fortunegiants’ winless streak continued in their first match of the Jaipur Leg as they had to settle for a tie against Jaipur Pink Panthers in spite of a second-half fight that almost brought them their first win in five matches. However, they will have a chance to get that win against U Mumba, a team that they enjoy an impressive record against in vivo Pro Kabaddi. The last time these two teams met in U Mumba’s home leg, Gujarat Fortunegiants had to walk away with a defeat. In the game against the home team Jaipur Pink Panthers yesterday, Defender Parvesh Bhainswal scored a High 5 by scoring 5 points. He got  a good company from the raider Sachin Tanwar who too scored 5 points in the match. Their are a few records the team will be setting in today’s match. Rohit Gulia is 8 raid points away from 100 raid points in PKL 7 while Sunil Kumar is 4 tackle points away from 50 tackle points in PKL 7. It goes on to see if both of them are able to reach their records today or not.

MUM vs GUJ Match Timing & Match Details: The Kabaddi match between U Mumba and Gujarat Fortunegiants will be played at Sawai Mansingh Indoor Stadium, Jaipur on 22nd September 2019 at 7:30 PM IST.

MUM vs GUJ Broadcast Details: The Kabaddi match between U Mumba and Gujarat Fortunegiants will be telecasted across the Star Sports Network in multiple languages. Live Score updates and live stream will be available on Hotstar.

MUM vs GUJ Best Players:
U MUMBA:
Arjun Deshwal: The young raider has been playing well off late. He has 78 points in 15 matches and is a significant player for his side.

Abhishek Singh: The vigorous raider has been the most successful raider for his side. He has played 14 games for his side and scored 88 points till now. He is a complete raider and is one of the key players of his side.

GUJARAT FORTUNEGIANTS:
1. Sachin Tanwar – One of the top raiders of his side after Rohit, Sachin has performed consistently for side and led the raiding department well along with his fellow raiders. He has scored 84 points in 15 matches and remains a key player of the side.

2. Rohit Gulia – The all-rounder has been the top raider for his side. He has been performing well for the side as his contribution is a key in the team’s win. So far, he has 96 points in 17 matches and is one of the raiding mains of his side. Rohit has 3 Super 10s this season. 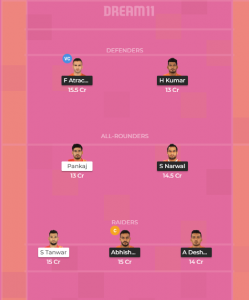