Pankaj is an Indian kabaddi player who plays as an all-rounder. He started his career of Pro Kabaddi League with U.P Yoddha in Season 5. Pankaj, who is a very capable all-rounder played 13 games for U.P Yoddha in his debut season. Thereafter, he played only 1 game in the next season for the same team.  In season 7 of VIVO Pro kabaddi, Gujarat Fortune Giants bought him for a bidding price of 10 lakhs. So now he will represent Gujarat Fortune Giants in the upcoming season. 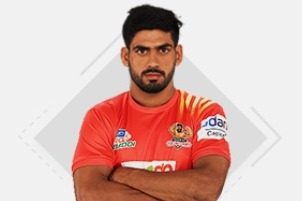 Career Best Points in a match: 3