IND vs SA Dream11 Prediction: With the first match between India and South Africa being whitewashed due to rain, India would be eager to win both the remaining matches in a bid to clinch the series 2-0.

Coming into the series with a 3-0 victory against West Indies, India would want to keep the momentum going and not suffer defeat against a revamped South African side.

INDIA
Bowling mainstays such as Jasprit Bumrah, Bhuvneshwar Kumar, Kuldeep Yadav, and Yuzvendra Chahal have been rested for the second consecutive T20 series in a bid to find the suitable combination for the upcoming T20 World Cup, scheduled to be held in 2020.

While Shikhar Dhawan and Rohit Sharma are expected to open the innings, India have gone with a back-up opener in KL Rahul. Virat Kohli along with Manish Pandey and Shreyas Iyer will form the middle order, while Rishabh Pant and Hardik Pandya will have the responsibility for the fireworks at the end.

India has persisted with three young seamers in Navdeep Saini, Rahul Chahar, and Khaleel Ahmed, while there would be a toss-up between Krunal Pandya and Ravindra Jadeja in the spin department.

SOUTH AFRICA
South African wicket-keeper, Quinton De Kock has been given the opportunity to lead a revamped South African side. Some have opted not to play and some have retired, as the current South African side is likely to see some new faces in the series.

The onus will be one Quinton de Kock, Kagiso Rabada, David Miller to lead the side and give a tough competition to the hosts.

IND vs SA 2nd T20I Pitch Report: The match between India and South Africa will be played at IS Bindra Stadium, Mohali. What was a bowling paradise back in the ’90s has now turned to be a good wicket for batting. Scores of above 180 can be easily achievable at this ground.

As many as four T20 matches have been played at this ground so far, with both batting and bowling first side winning the contest twice each.
Average first innings score: 184
Average second innings score: 175

IND vs SA Broadcasting Details: The match between India and South Africa will be telecasted on Star Sports and live stream is available on Hotstar.

INDIA
Rohit Sharma – India’s are limited over’s vice-captain, Rohit Sharma has been in fabulous form, having enjoyed a stellar run in the World Cup 2019. He will have the responsibility on his shoulder to give a good start to the team.
Virat Kohli – Run-machine Virat Kohli should be a must-have pick in your fantasy side. The Indian skipper is undoubtedly the foremost pick as captain in the team. The Indian skipper played stellar knocks in the last series against West Indies as he will look to keep piling runs ahead of the second T20 against South Africa.

SOUTH AFRICA
Rassie van der Dussen – The South African batsman has made an important place in the South African side in a very short span of time. The right-handed batsman enjoyed a great time with the bat in the World Cup 2019 as well as Canada T20 League. Unarguably, he will have a bigger role to play if South Africa fancy their chances against India in the T20 series.
Quinton De Kock – South Africa-India T20 series is the first assignment for Quinton de Kock as the captain of the side. It will be interesting to see how he fares with his bat and captaincy at the same time. 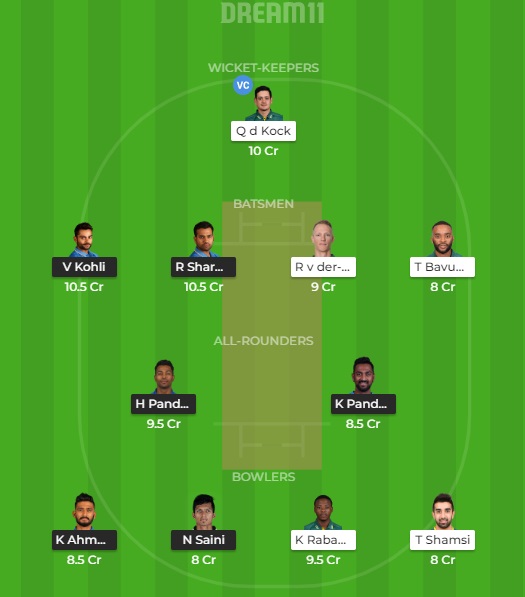 Catch all the live updates of IND vs SA Cricket Match, including live scores and match report. This time IND vs SA 2nd T20I Dream11 Prediction will depend on the final team line-ups.