Jaipur Pink Panthers: Having lost quite a few games consecutively in the recent matches, Jaipur Pink Panthers are slowly slipping down in the points table. One area where Jaipur raider have found it difficult is during Super Tackle situations. The team has the 2nd lowest Raid Strike Rate in Super Tackles. One of the main reasons has been the number of empty raids in these situations. Also that Jaipur Pink Panthers in the past 6 matches have scored 34 Bonus points. The team in the first 9 matches scored only 21 bonus points. The side’s agility to get touch points has decreased and it has also affected the revival of their raiders. In the last game, they lost to Patna Pirates in a close match that ended with the scoreline of 33:36. Sushil Gulia (8 Points) and Nitin Rawal (6 Points) were the top scorers for the side. Sandeep Dhull and Deepak Hooda scored 5 points respectively.

UP Yoddha: The side’s recent performances have allowed them to climb up the points table as they are now placed at the seventh position in the points table. The last game against Gujarat Fortune giants ended in their victory as the entire team contributed very well from their end. Shrikant Jadhav (6 Points) and Surender Gill (6 Points) were the joint top scorers for the side. In fact, Shrikant Jadhav has been the biggest influence in the raiding unit in the last 4 matches. Having contributed up to 59% of the team’s raid points in the last 4 games, he has become a key player of the side. All-rounder Rishank Devadiga too contributed well from his side as he scored 5 points. Defenders Sumit and Nitesh Kumar are also in a good form as they are scoring well in the last few games. As they beat the Jaipur side earlier this season, Skipper Nitesh Kumar would want his side to do the same in today’s game too.

JAI vs UP Match Timing & Match Details: The Kabaddi match between Jaipur Pink Panthers and Up Yoddha will be played at Shree Shiv Chhatrapati Wrestling Hall, Pune on 16th September 2019 at 7:30 PM IST.

JAI vs UP Broadcast Details: The Kabaddi match between Jaipur Pink Panthers and UP Yoddha will be telecasted across the Star Sports Network in multiple languages. Live Score updates and live stream will be available on Hotstar.

JAI vs UP Head to Head:

JAI vs UP Best Players:

Jaipur Pink Panthers
Deepak Niwas Hooda – The skipper is currently the top scorer of his side in this season. Deepak who was out of his form in some games has been doing well on the mat. He has scored 107 points in 15 matches this season and has managed to score 4 Super 10s.
Sandeep Dhull – The inventive defender leads the defensive department of the team. He tends to soak in the pressure during the course of the game. He has 55 points in 15 games that include 5 High 5s too.

U.P. Yoddha
Shrikant Jadhav – The raider has become one of the mains in the raiding department from the last few games. Shrikant had scored 81 points in 14 matches and has 2 Super 10s this season.
Sumit –  The mulish defender has been in charge of his side’s defense unit. Till now he has scored 50 points in 14 games that include 4 High 5s too. He has been doing well from the past few matches.

Suggested JAI vs UP Dream11 Team: 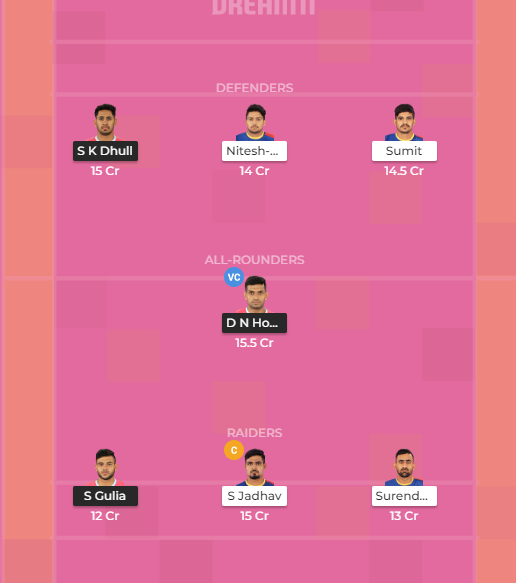 Catch all the live updates of JAI vs UP Kabaddi Match, including live scores and match report. This time JAI vs UP Dream11 Prediction will depend on the final team line-ups.