INT vs SLPG Dream11 Prediction: Inter Milan will be up against Slavia Prague in their opening game for the race to become the European Champions. Inter Milan has won 3 out of 3 games in Serie A and is at the top spot, it will look to continue their fine form in the all-important tournament. Slavia Prague to is a top spot in their Domestic League with 7 wins in 9 games.

INT vs SLPG Match Timings & Details: The match is scheduled to start at 10:25 PM IST, on 17th September 2019. The match will be played at San Siro, Italy.

INT vs SLPG Broadcast Details: The match will be telecasted by Sony Network and can also be viewed on Sony LIV app.

INT vs SLPG Head to Head: The two teams will meet for the first time.

Inter Milan
Romelu Lukaku – the Belgian international has made his Serie A debut this season and has made his presence felt after scoring 2 goals in 3 games. All eyes will be on him when he will lead the Milan attack at UCL.
Stefano Sensi – The 24-year-old midfielder too has made his debut this season for Inter Milan and may start in the opening game of UCL as well with the kind of form he is in for past few months. He has decent finishing skills and a good sense of ball in the middle.

Slavia Prague
Nicolae Stanciu – the Romanian attacking midfielder or winger is one of the crucial players for Prague. He has scored 2 goals in his domestic campaign this season and would want to continue his fine form in the League as well.
Josef Husbauer – the midfielder is in great touch this season where he has scored 4 goals and will play a key role for his team in UCL. 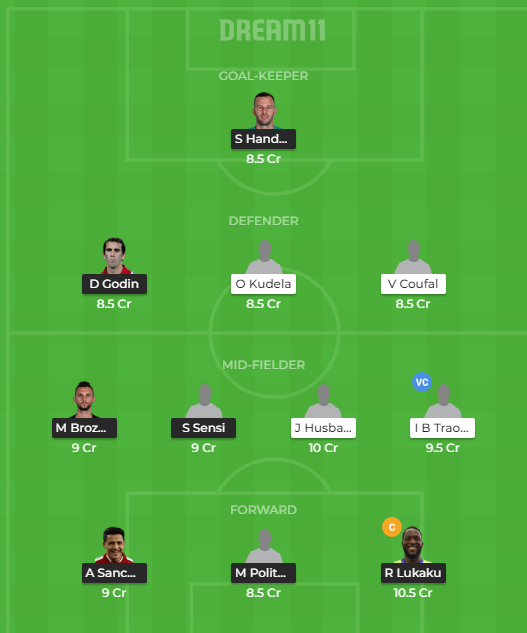 Catch all the live updates of INT vs SLPG Football Match, including live scores and match report. This time INT vs SLPG Dream11 Prediction will depend on the final team line-ups.