Bengaluru Bulls: With a full chance of making into the play offs, Bengaluru Bulls have been able to stay in the top six as they cement their position for the play offs. The defending champions have been solid this season with a bit of ups and downs but that didn’t seem to hamper their dominance much. In their last game against U Mumba they had a dominating outing as they grabbed the victory from the hands of U Mumba side. Pawan Sehrawat was the top scorer of the side as he scored 11 points against the strong defense unit of U Mumba. Raider Banty helped him with valuable 6 points in the match. Among the defenders Saurabh Nandal was the top scorer as he top notched in the defense side with a High 5. Overall the defense unit did well except that their top defender Mahender had to settle down with no point in the game. They will be in a confident frame of mind after a thrilling win against U Mumba in their last game and will also want to avenge their loss against Haryana Steelers from earlier this season. Since skipper Rohit Kumar may be doubtful to play the match, coach Randhir Singh will be expecting all his players to take the responsibility well in his absence.

Haryana Steelers: Placed third in the points table, Haryana Steelers have easily earned a place in the play offs this season. Riding on consistency, Haryana Steelers will be confident for their game against Bengaluru Bulls as they come after defeating Gujarat Fortunegiants in their last match. It was a riveting contest between both the sides but due to some brilliant raids from Prashanth Kumar Rai and Vikash Khandola the side managed to win the match with a difference of just 1 point. Vikash Khandola was the top scorer of the side as he scored 10 points in the match. He got  a good sustenance from his partner  Prashanth Kumar Rai (9 points) as he helped him by taking the raids and scoring regularly for the side. Sunil was the top scorer among the defenders as he guarded the corner for the side. The fact that they have already beaten Bengaluru Bulls once this campaign and will fancy their chances in front of their home faithful. Talisman Vikash Kandola will be their biggest offensive threat, but Prashanth Kumar Rai and Vinay have also proven themselves while raiding in crunch situations this year. They will step on the mat to have an victory assured as the players are in a positive mindset.

The Kabaddi match between Bengaluru Bulls and Haryana Steelers will be played at Tau Devilal Sports Complex, Panchkula, Chandigarh on 2nd  October 2019 at 8:30 PM IST.

The Kabaddi match between Bengaluru Bulls and Haryana Steelers will be telecasted across the Star Sports Network in multiple languages. Live Score updates and live stream will be available on Hotstar.

Pawan Kumar Sehrawat: Having the most number of points in this season, Pawan has been the most valuable of a raider for his side. He has 256 points in 19 matches and he has 13 Super 10s this season. He is the key player of the Bengaluru side.

Rohit Kumar: The skipper has 92 points in 17 points as he has led his side after Pawan. Rohit is just 8 points shy of completing his 100 points this season and would be keen on achieving it at the earliest.

Vikash Khandola- The star raider is one of the mains in his team. He has played 16 games scoring 157 points in this season. Vikash has 9 Super 10s this season as his dominance continues.

Vinay– Vinay is the second-best raider for his side and provides great support to Vikas Khandola in scoring points. He has 96 points in 19 games so far and looks to take his game on another level in the upcoming matches. He is just 4 points shy of completing his 100 points in this season. 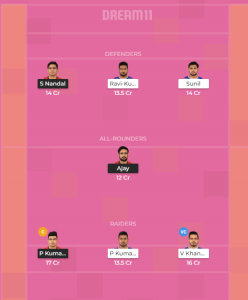