Manchester City vs Tottenham Dream11 Prediction, Live Score & Dream Team
In what is the game of the weekend, Manchester City will host Tottenham Hotspur. Both teams are coming on the back of strong wins in their previous encounters with City beating West Ham 5-0, while Spurs got the better of newly promoted Aston Villa 3-1. Sterling scored a hattrick in the opener, while Harry Kane netted a brace for Spurs and it would make for an intriguing battle.

Dele Alli continues to remain sidelined, while Son is suspended. For City, Bernard Mendy and Leroy Sane are absentees due to injury.

MCI vs TOT Match Timing & Match Details
Manchester City vs Tottenham Hotspur match will be played at the Etihad stadium, home of Manchester City on 17th August, 2019 at 10:00 PM IST.

MCI vs TOT Broadcast Details
Manchester City vs Tottenham Hotspur match will be telecasted on Star Sports Network. Live score updates and live stream will be available on premierleague.com and Hotstar respectively.

MCI vs TOT Best players
Manchester City Top Players
Sterling- The England winger has been prolific over the last couple of seasons, and he began this season in similar fashion, netting hattrick in his side’s opening game.

Kevin de Bruyne– The assist-master missed a large part of last season due to injury, but he is fit and back now. He got a crucial assist in the last game. In addition to playing those killer-balls, he can control the game in the middle of the park.

Tottenham Hostspur Top Players
Hary Kane- He scored a brace on the opening weekend, taking on from his 22-goal season last time.

Christian Eriksen– Eriksen came on in the last game and made instant impact as the whole dynamics of Spurs’ play changed. The Danish International got 8 goals and 12 assists last season. 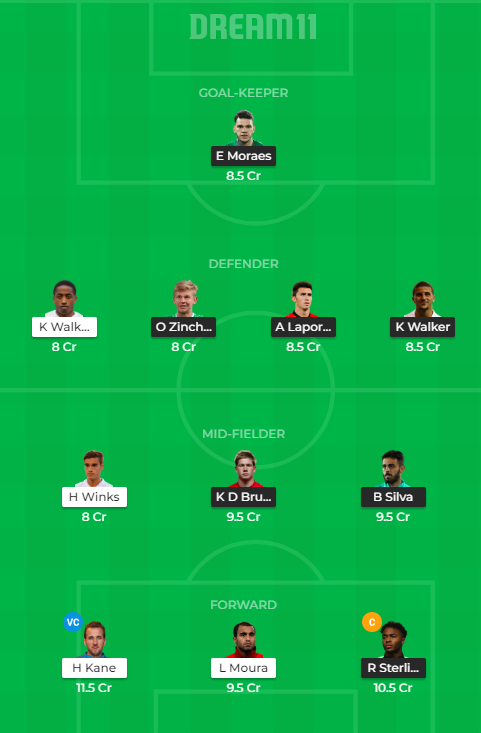 Catch all the live updates of MCI vs TOT Football match, including live scores and match report. This time MCI vs TOT Dream11 Prediction will depend on the final team line-ups.