ARS vs BUR Dream11 Prediction: Gameweek 2 of the Premier League will begin with the clash between Arsenal and Burnley as The Clarets take a trip down to London. Both teams had a good start to their campaign with Arsenal defeating Newcastle 1-0, while Burnley ran riot at Turf Moor, defeating Southampton 3-0 with their long-ball tactics.

Arsenal goes into the game as clear favorites, but Burnley can prove to a tough nut to crack and with them having got their goal-scoring boots, Arsenal might not have it all easy.

Arsenal Top Players
Aubameyang – The Gabonese striker was the team’s top scorer and joint top scorer in the league last season. He netted 22 times last season and he got off the mark at the opening game week, scoring Arsenal’s winner against Burnley
Nicolas Pepe – The winger scored 23 goals and 12 assists in all competitions in the last season. He is likely to start tonight and can inflict some serious damage.

Burnley Top Players
Ashley Barnes – He scored a brace on the opening weekend and has been a key figure in this Burnley side. He will also be a big threat on set-pieces.
Gudmundsson- The winger opened his account on the weekend, helping Burnley register a big win. He has been among the goals and assists, netting 3 times and creating 6, last season. 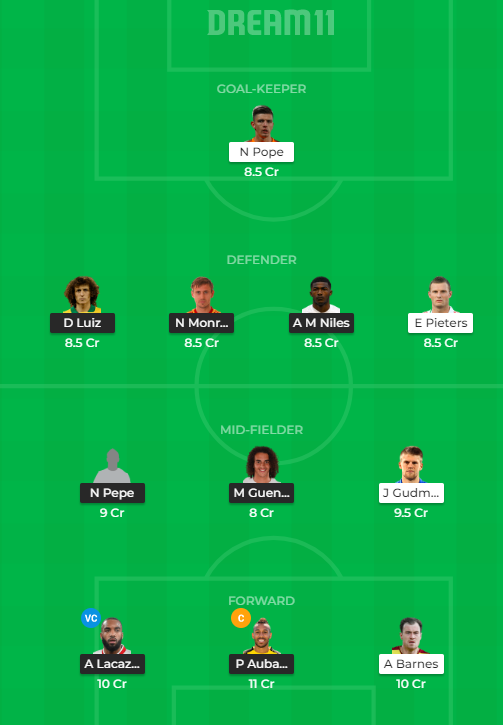 Catch all the live updates of ARS vs BUR Football Match, including live scores and match report. This time ARS vs BUR Dream11 Match Prediction will depend on the final team line-ups.