LIV vs SOU Dream11 Prediction: Liverpool are in their golden period. After winning the Champions League last season, they had a near-perfect start to the season with a 4-1 thumping of Norwich City, followed by a UEFA Super Cup win, which sees them get back their perch as the most successful club of England. They travel to Southampton today after playing 120 minutes of football midweek. Southampton might look to make the most of Liverpool’s tiredness to get a favourable result. But Liverpool are also used to situations such as these and would go all out to keep up the pace with City, right from the start.

LIV vs SOU Broadcast Details: The match between Southampton and Liverpool will be telecasted on Star Sports Network. Live score updates and live stream will be available on Premierleague.com and Hotstar respectively.

Liverpool Top Players
Mohamed Salah – The Egyptian star is one of the best strikers in the world currently and Liverpool’s season majorly depends on his form. Due to his world-class finishing abilities, he scored 22 goals in the last premier league season.  He also scored a goal and got an assist to his name on the opening weekend
Virgil Van Dijk – The center-back is another wonderful player who has a great defense and ball clearing ability. What makes him a key player is his good finishing skills at the important moments of the game. He too scored last weekend.

Southampton Top Players
Nathan Redmond – He got 6 goals and 4 assists last season and creates havoc down the flanks with his pace and trickery. He could test the Liverpool defence, that hasn’t looked at its best thus far this season.
Che Adams – The mega signing, having being brought-in for over 15 million, is carrying a lot of the side’s hopes. He scored 22 goals last season and would be expected to end Southampton’s goal-scoring woes. 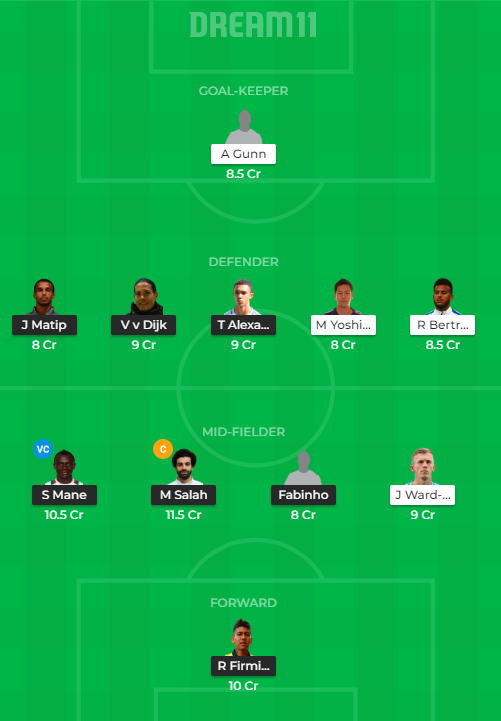 Catch all the live updates of LIV vs SOU Football Match, including live scores and match report. This time LIV vs SOU Dream11 Match Prediction will depend on the final team line-ups.