In the next match of Major League Soccer Wester Conference, LA Galaxy will lock horns against Seattle Sounders on Sunday. LA Galaxy are going well and sit third on the table after having played 25 games. They would be looking for a further push in these latter stages of the league. As for Seattle, they are just a point off LA Galaxy and find themselves fifth on the table.

Will Bruin, Brad Smith and Alex Roldan will miss for Seattle Sounders, while Gustav Svensson, Victor Rodriguez and Kelvin Leerdam are all doubt for the game. Romain Alessandrini is the only missing player for LA Galaxy, who is out injured.

LAG vs SS Match Timing & Match Details
LA Galaxy vs Seattle Sounders will be played at Dignity Health Tennis Center, Carson, USA. The match will start at 7:30 AM IST on August 18th, 2019.

LAG vs SS Best Players
LA Galaxy Top Players
Zlatan Ibrahimovic – The Swedish star is clearly the best player in the squad currently, where he has found the net 13 times in 16 appearances. The forward has also made 3 assists.

Daniel Steres – He is the second best scorer of his team with 3 goals to his name. The defender has been quite influential on the pitch while leading the defense as well.

Seattle Sounder Top Players
Jordan Morris – The 24-year-old attacking midfielder has 7 goals in 18 games this season and has made 2 assists as well. He is an important player in the system.

Nicolas Lodeiro – Another attacking midfielder who has been in great touch this season as he has scored 5 goals and has made 6 assists as well.

Raul Ruidiaz– Peru forward is the top scorer for the side with 8 goals this season. 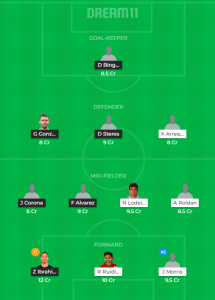 Catch all the live updates of LAG vs SS Football match, including live scores and match report. This time LAG vs SS Dream11 Prediction will depend on the final team line-ups.