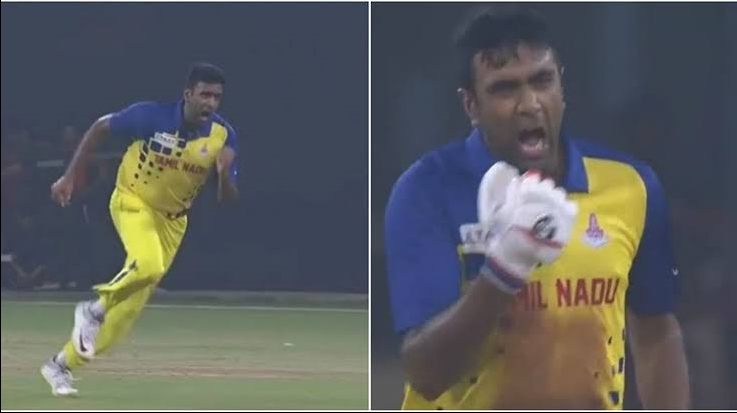 The Syed Mushtaq Ali Trophy 2019 final between Karnataka and Tamil Nadu went down to the wire and Karnataka had the last laugh in the epic encounter as they won the game by only 1 run. The match had its moments and Tamil Nadu all-rounder R Ashwin became the victim of the trolls after he did a premature celebration in the final over.

Tamil Nadu needed 13 runs in the last over to win the final. Ashwin hit Krishnappa Gowtam for back to back fours in the final over and then he shouted with joy and also punched the air in delight. But it was too early to celebrate for Ashwin in the end as Gowtham successfully defended the 13 runs. He came back strongly with his next four deliveries with Shankar even getting run out off the penultimate ball.

And the fans on social media were all over Ashwin since then for his premature celebration and also trolled Bangladesh’s star batsman Mushfiqur Rahim by saying ‘Ashwin did a Mushfiqur Rahim.’

The memories of Mushfiqur Rahim doing a premature celebration in the T20 World Cup 2016 is still intact in the minds of Indian fans. He did also a similar thing against India in that game and ended up in the losing side in the end. Mushfiqur hit a boundary off Hardik Pandya’s over and he celebrated in the same manner after his side needed only 2 runs from 3 balls.

But Bangladesh then stunned the cricket world as both Mushfiqur and Mahmudullah gave their wicket away. With 2 runs needed in one delivery, Shuvagata Hom missed the ball and Mustafizur Rahman was run-out after he ran for a single.

This Ashwin said one day not to celebrate the win before the match, he did today as if he had won the World Cup.#ashwin#MushtaqAliT20@ashwinravi99 pic.twitter.com/JAh50ICd1g