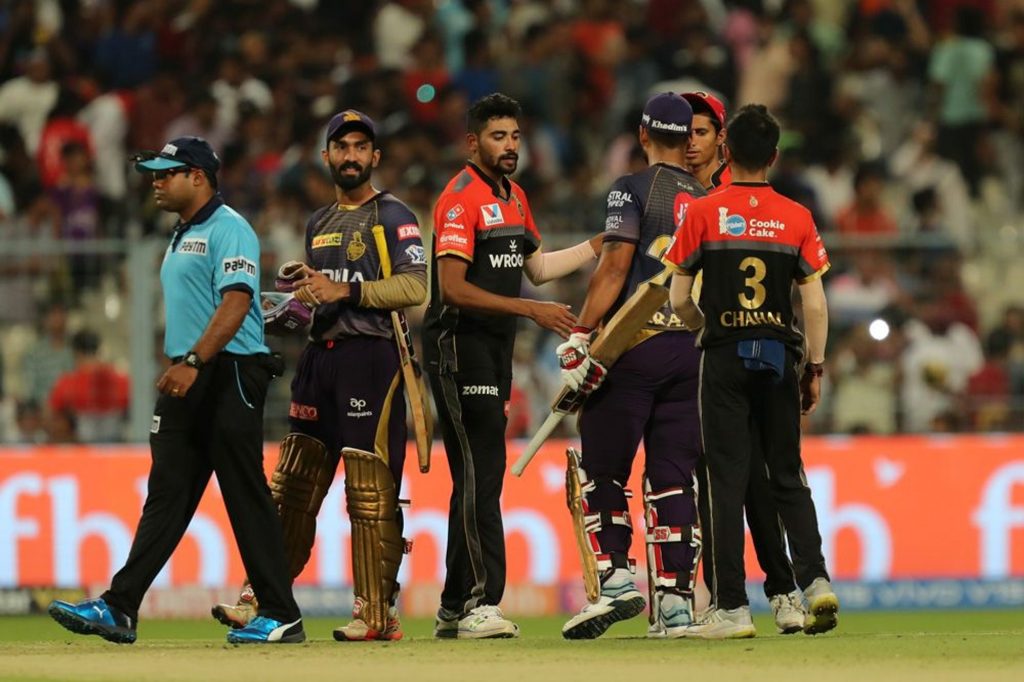 RCB vs KKR Match Summary: Moeen Ali produced a brilliant last over in the second innings only to hand RCB their second win in the tournament.

Andre Russell continued his power hitting, as along with Nitish Rana took the game till the end, however, lost the match in the end by 10 runs on Sunday.

Being down from 79 for four in 12 overs, Nitish Rana and Andre Russell added 116 runs for the fifth wicket between them. Needing 24 runs in the final over, Nitish Rana couldn’t hit a six in the first two deliveries as RCB finally registered a win after so long in the tournament.

We never give up and that display from @NitishRana_27 & @Russell12A just showed that. ?

It has been a below-par season for Robin Uthappa who once again failed to make a mark on Saturday. Robin Uthappa used up 20 deliveries to score nine runs before getting out in the 12th over, while Shubhman Gill also departed early, scoring just nine runs off twenty deliveries.

Virat Kohli scored his first century of IPL 2019, as RCB posted a mammoth 213 runs total in the first innings. It was a day witness Virat Kohli’s masterclass. The 30-year old skipper took 58 balls to score a match-winning century on Saturday.

Opener Parthiv Patel and Akshdeep Nath fell cheaply, however, it was Virat Kohli and Moeen Ali’s partnership which took the match away from RCB. The duo added 90 run partnership between them.

Moeen Ali’s played aggressively while Virat played as a second fiddle till the time Ali was at the crease. Moeen Ali’s blitzkrieg ended on 66 off 28 balls. The England all-rounder smashed 27 runs to Kuldeep Yadav in a single over, hitting as many as three sixes in that over.