Manchester United will take on Chelsea at Old Trafford, Manchester, the home ground of Manchester United on 11th August 2019.  Looking at the last season, Chelsea finished the table at 3rd position and qualified for UEFA Champions’ League group stage. They played a total of 38 matches, won 21; lost 8 and 9 resulted in a draw. 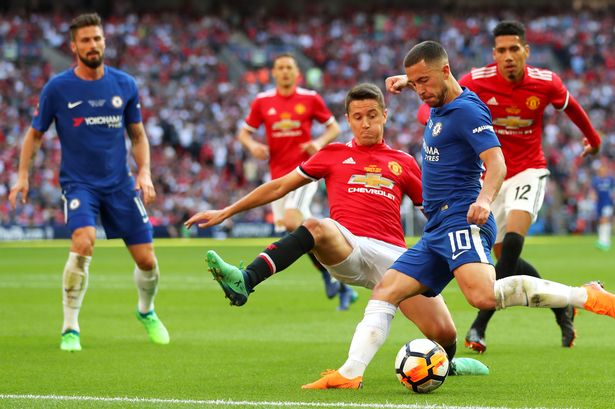 Manchester United finished the table at 6th position qualifying for Europa League group stage. They played a total of 38 matches, won 19, lost 10 and 9 resulted in a draw.

Matches won by Manchester United (Away)-5

Matches won by Chelsea (Away)-6

Marcus Rashford- In the absence of Lukaku, all the eyes will be on young Marcus Rashford. He was the star performer for Manchester United in the last season with 10 goals to his name.

N’Golo Kante-. If Chelsea has to live to its expectations in the upcoming season, Kante will have a key role to play. He appeared in 36 matches and despite playing in a deeper role, scored 4 goals and added 4 assists to his name

Cristian Pulisic- In the absence of Eden Hazard, Pulisic will have to step up and take the responsibilities. The American is a new signing for Chelsea,signed for a whopping amount of 60,00 Mill. €. He will be the player to watch out for in the EPL 2019/20 season.

Both teams look evenly matched, however, Chelsea are without their star player Eden Hazard, and might find the going tough. United are also at home, and might be slight favourites for the game. United might take this on 2-1.

Martial and Rashford will hold the goal-scoring key for United, while Barkley and Abraham will be the top contenders for getting goals for Chelsea.

The match between Leicester City and Wolverhampton Wanderers will be telecasted on Star Sports Network. Live score updates and Live stream will be available on www.premierleague.com and Hotstar.

Match Highlights will be available on Hotstar