PAT vs UP Dream11 Match Prediction, Live Score & Team
Patna Pirates will invite UP Yoddha next, in what will be their fourth match of the home leg. Patna Pirates have lost all three of their previous home games, and would be looking to put that to rest and make the most of the home support. As for the UP Yoddha, they are crawling their way back into contention, having tied two and won one of their last 3 games.
It would make for a nail-biting contest.

PAT vs UP Dream11: Match Timing & Match Details
The kabaddi match between Patna Pirates and UP Yoddha will be played at the Patliputra Sports Complex on 9th August 2019 at 8:30 PM IST.

PAT vs UP Dream11: Broadcast Details
The kabaddi match between Patna Pirates and UP Yoddha will be telecasted across Star Sports Network in multiple languages. Live Score updates and live stream will be available on Hotstar.

PAT vs UP Dream11: Best Players

Patna Pirates Top Players-
Pardeep Narwal: The Dubki King has now scored 900 raid points in Pro Kabaddi League, becoming the first player to reach the feat. He has got back his form in the home leg and went on to score 14 points in the last game. He now has 47 points in 6 games.

Jaideep: He has been Pirates’ best defender. He is the third highest scoring defender thus far in Pro Kabaddi 2019 with 21 points in 6 games.

Monu: He has been the super-sub for Patna and has been their x-factor. He contributes in both departments and has scored crucial points for his side. He has a total of 18 points, which includes 11 tackle points and 7 raid points in only 6 games, most of which saw him as a  substitute.

UP Yoddha Top Players
Monu Goyat: Monu has been one of the very few positives the UP Yoddha side has thus far. He hasn’t lived up to the billing yet, but has scored 15 points in 4 games, which isn’t the worst. He also has a successful tackle to his name.

Sumit: UP has struggled pretty much throughout their campaign thus far, but Sumit has been a bright spark in defence. The left-corner defender has been good and has scored 14 points in the 5 matches played.

Rishank Devadiga: He was the team’s top scoring player in the last game, securing 5 raid points. UP have looked a different outfit upon his return.  He has been a part of just 3 games yet, and has scored 7 points.

PAT vs UP Dream 11 Team Prediction 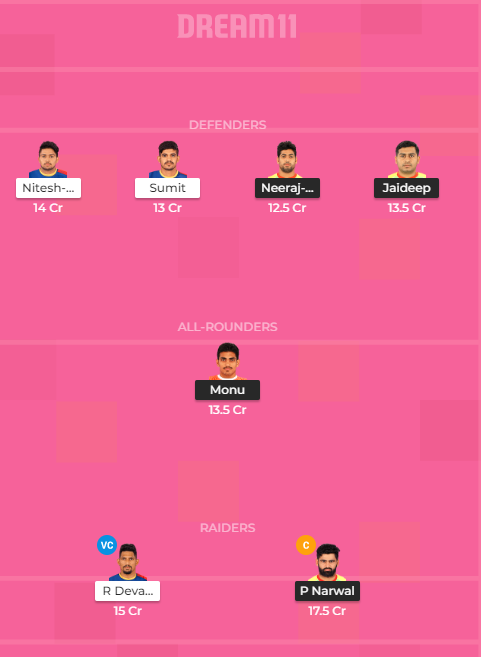 Catch all the live updates of PAT vs UP Pro Kabaddi match, including live scores and match report. This time PAT vs UP Dream11 Prediction will depend on the final team line-ups.