BEN VS MUM Dream11 Match Prediction, Head to Head & Team
Match 32 of the VIVO Pro Kabaddi League will see U Mumba take on Bengal Warriors at the Patliputra Sports Complex, Patna. The last time both teams played each other, U Mumba got the better of Bengal Warriors by a scoreline of 31-20, but things are different now, and Bengal would start as favorites.

The likes of Maninder Singh, Esmaeil Nabibakhsh, K Prapanjan, and Baldev Singh have been pivotal for the Future Group owned side and yet again, would hold key. Bengal have won two of their 4 games, and lost the last game only in the last minute.

For Mumbai, it has been a forgettable campaign thus far, winning just 3 of their 6 games. But they would be happy having beaten one of the most formidable units in Gujarat Fortunegiants in their last game. Abhishek Singh, Fazel Atrachali and Surender Singh have been the standout players.

BEN vs MUM Match Timing and Match Details
The kabaddi match between U Mumba and Bengal Warriors will be played at the Patliputra Sports Complex on 9th August, 2019 at 8:30 PM IST.

BEN vs MUM Broadcast Details
The kabaddi match between U Mumba and Bengal Warriors will be telecasted on Star Sports Network. Live Score updates and Live stream will be available on Hotstar

Bengal Warriors Top Players:
Maninder Singh – The prolific raider has 40 points in 4 games. He has led from the front and been a point-poacher for his side.

Esmaeil Nabibakhsh –  The x-factor of Bengal Warriors Nabibakhsh has lived up to his billing with 28 points in 4 games. He has contributed to both departments.

Baldev Singh – He has been the pick of Bengal Warriors defenders, scoring 16 tackle points from 4 games. He has made right corner his own.

U Mumba Top Players:
Abhishek Singh – He has been the mainstay of U Mumba’s raiding department and a star for them this season, having played a big hand in all their wins. He was their star performer in the last game as well, scoring 5 raid points.  He has scored 35 raid points in 6 games at an average of almost 6 points per game, which is phenomenal.

Surender Singh – The right cover defender has outshone captain Atrachali and has claimed 20 points in the 6 games. He has been phenomenal with his tackles, and his confidence is only rising. He was brilliant against Gujarat Fortunegiants, keeping their raiders at bay.

Fazel Atrachali – The captain of the side, leads from the front and bounced back strongly after a defeat in the second game, where the defence was an issue. He worked on it with his team, leading them to success in the next game. He has scored 17 points in total, including a rare raid point. 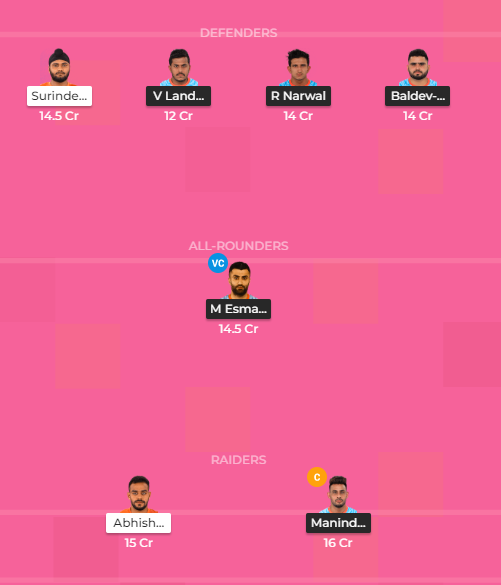 Catch all the live updates of BEN VS MUM Pro Kabaddi match, including live scores and match report. This time BEN VS MUM Dream11 Prediction will depend on the final team line-ups.