Tottenham have been struggling this season due to the bad performances of several key players. Harry Kane is in decent form but is not getting the required support from other players. The Spurs have managed just one win in five games whereas they have not won a single game in the past four matches. The Londoners will look to change their fortune.

The newly-promoted team is the high flyers in the league. The team is looking balanced in all three departments. Sheffield United has not faced a loss in the past four games and would look to continue their good form.

The broadcast right to English Premier League lies with the Star Network in India. The matches can be viewed on Star Network in HD. Hotstar; the digital platform of Star Network will stream the game live on Internet. Live scores will be available on the official website.

Tottenham
Harry Kane: The English captain is one of the finest strikers in the world right now. The player, as usual, has been the leading scorer for Tottenham this season. The striker has managed to score six goals in 10 games and has also provided one assist to his teammates.

Son Heung-Min: The South Korean was involved in the controversial tackle against Andre Gomes last season. The player, however, came back with a two-goal performance in the Champions League. Son has two goals and three assists in eight games.

Lys Mousset: The forward has produced some quality for the newly-promoted side. He always looks dangerous when facing the goal. The player has three goals and three assists in just two starts. 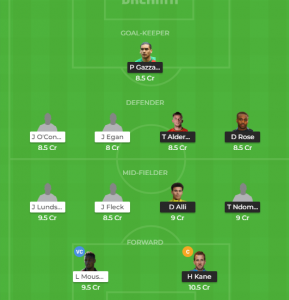