NOR vs WAT Dream11 Prediction: The two teams will face each other for the 12th game of their campaign. Both sides are struggling and have occupied the two spots at the bottom of the table. Watford have failed to win even a single game in the 11 matches they have played. Watford is placed on the last spot on the table with five points in 11 games.

Norwich is slightly better at the 19th spot with two wins and one draw. Norwich has seven points. A defeat for either team could put them in further trouble.

NOR vs WAT: Match timings & details

The match will be played at the home ground of Norwich City, Carrow Road. The game will commence at 1:30 AM on 9th November 2019, according to IST.

The Star Network in India holds the broadcasting rights of the English Premier League. The match can be streamed live on the internet on the digital platform of Star Network, Hotstar. The live scores will be available on official websites.

NOR vs WAT: Head to Head

NOR vs WAT: Predicted starting a team (XI)

NOR vs WAT: Best players

T.Pukki: The forward has proved his worth in the games he has played so far. Pukki was instrumental in Norwich’s victory over Manchester City. Pukki has scored six goals and two assists in the season so far.

Gerard Deulofeu: The Spanish player is a player who has impressed in an otherwise timid campaign for Watford. Deulofeu has scored one goal and provided one assist in eight appearances. The player looks promising when in the possession and is exciting in attack.

NOR vs WAT: Predicted Dream11 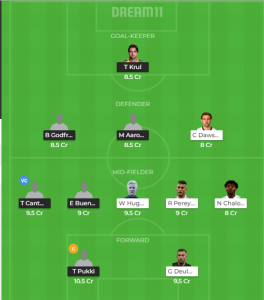