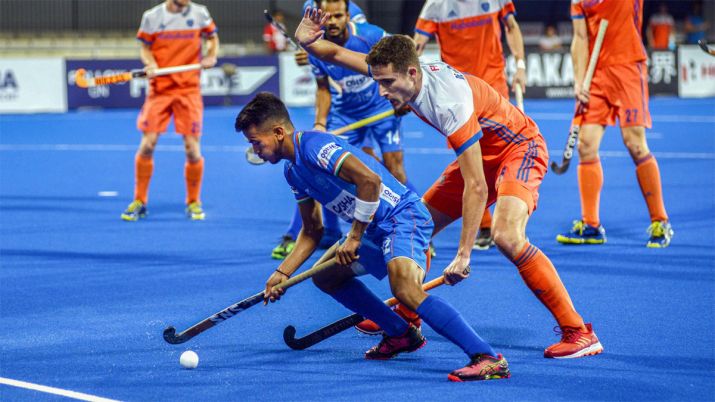 The Indian team defeated the Netherlands in the 2nd leg of Pro Hockey League match in a thrilling encounter that went to a penalty shootout after India equalled the score at 3-3 played at Kalinga Stadium, Bhuvneshwar on Sunday.

It was a brilliant start by the Indian team who attacked with more precision and put the Netherlands defence under pressure. In the 4th minute, Lalit Upadhyay missed a golden chance as he shot wide off the goal post. India earned their first penalty corner of the game in the 9th minute but could not convert it into a goal as the shot went out wide. At the end of the first quarter, the scores were 0-0.

The third quarter saw the Netherlands continue their dominating display, holding the possession of the ball and attacking the opposition. At this juncture, Mandeep Singh was given 10-minute suspension as he was judged as playing the rough game which could have injured the opponent. However, the Indian defence with only 10 players did a great job of wading the threat of another goal by the Netherlands.  At the end of 3rd quarter, the Netherlands still led 3-1.

In the fourth quarter, it was an exciting hockey from the Indian team who put pressure on the Netherlands defence. In the 51st minute of the game, India earned a penalty corner which was converted by Mandeep Singh with a rebound shot to reduce the margin to 2-3, raising the hopes of levelling the score. In the 55th minute again, India earned a penalty corner that was converted by Rupinder Pal Singh to level the score at 3-3. After that, both teams tried to score the goals, but their defence did not allow to succeed in scoring a winning goal.  Thus, the match ended in 3-3 tie and went to the penalty shootout.

In the penalty shootouts, Harmanpreet and Hertzberger took the first shot respectively for India and Netherlands but missed the shot. Vivek Prasad the youngster gave the hosts team a 1-0 lead converting the shot into goal. For the Netherlands, their 2nd shot by Schuurman was well saved by P Sreejesh.

The third penalty shot by Rupinder Pal Singh was missed to retain the score at 1-0. Brinkman missed Netherlands third shot. The fourth shot for India by Gurjant resulted in India’s 2nd goal. Prusyer made it 1-2 in favour of Netherlands in their fourth shot. Akashdeep Singh scored the winning goal from the last shot and helped India register their first win.

Yesterday India had defeated the Netherlands by 5-2. Their next match will be against Belgium on 8th February.