NMG vs PR Dream11 Prediction: Nelson Mandela bay Giants will be up against Paarl Rocks in the 17th match of the Mzansi Super League. Giants have lost only one game so far out of the five and grabbed 19 points while Paarl Rocks lost two games and have 15 points in their account after playing the same amount of matches. A thrilling clash is on the cards between the top two teams of the tournament. Paarl Rocks won against the Giants comfortably when these two sides last met in 2018.

JJ Smuts has been one of the in form players for Giants so far. He got starts in almost every game this season and finally managed to play a big innings of 73 against Blitz. He is desperate to continue his good run and which might play a crucial role for the Giants.

Imran Tahir never disappoints when it comes to the shortest format of the game. He has really lived up to the expectations this season as well so far as he picked up 7 wickets in 5 games including a terrific display of 3/23 against the Stars.

James Vince had a terrific start of the tournament. He played only 3 games so far and scored 152 runs including an unbeaten knock of 86* against Spartans in his first game. He’s on a mission to become the leading run-scorer of the tournament.

Tabraiz Shamsi is the man Paarl Rocks’ look up to when they need a wicket and he always delivers. After playing only four games, Tabraiz has picked up 7 wickets including a stunning bowling figures of 3/16 in his first game of the season. 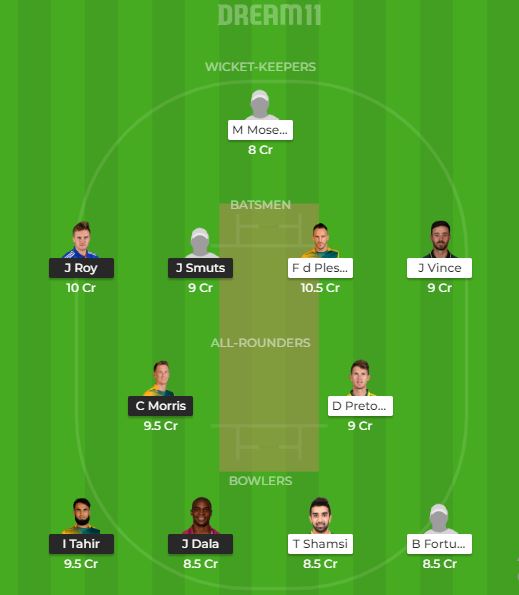