BAR vs DOR Dream11 Prediction: FC Barcelona will take on Bundesliga giants Borussia Dortmund in the opening game of Champions League. The match is expected to be a close encounter with slight home advantage to Dortmund. Barcelona hasn’t started off the season like they would have wanted but they still have managed to win 2 in 4 games while Dortmund has once again started their domestic season on a good note and is at 2nd place.

BAR vs DOR Match timings & Details: The match is scheduled to start at 12:30 AM IST, on 18th September 2019. The match will be played at Signal Iduna Park, home of Borussia Dortmund.

BAR vs DOR Broadcast Details: The match will be telecasted by Sony Network and can also be viewed on Sony LIV app.

BAR vs DOR Head to Head: The two teams haven’t met each other before.

Barcelona
Antoine Griezmann – the Frenchman has proved to be an outstanding transfer for the club. He has started off the season scoring 2 goals in 4 appearances and has even made 2 assists.
Luis Suarez – the Uruguayan striker has been the leader of the attack in the absence of Messi. He has looked in good touch in the domestic season and will be crucial in the UCL.

Borussia Dortmund
Marco Reus – the German forward is one of the top strikers in the world currently and has been brilliant for Dortmund. He has once again started off the season on a positive note and would want to continue his form in the all-important tournament.
Jadon Sancho – The 19-year-old midfielder has been impressive in the first 4 games of the season with 4 assists and 2 goals. He will play a crucial role in the midfield. 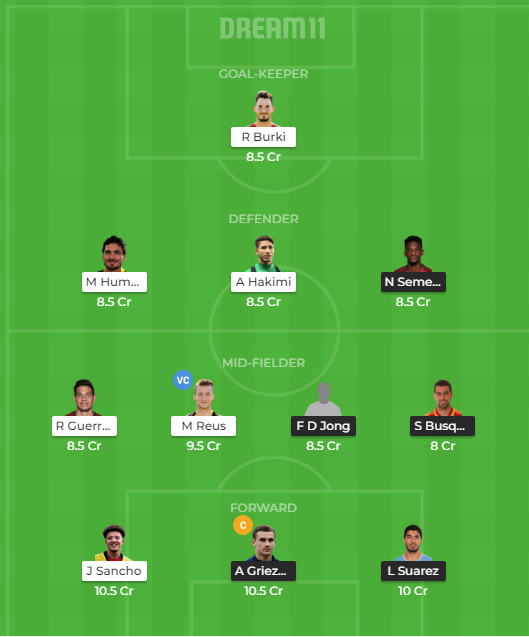 Catch all the live updates of BAR vs DOR Football Match, including live scores and match report. This time BAR vs DOR Dream11 Prediction will depend on the final team line-ups.