IRE vs SCO Dream11 Prediction: Ireland is hosting Scotland and Scotland in T20I tri-series at home. Ireland will play their second game of the series as their first game was washed out against Scotland. They will now play against Scotland who recently beat the Netherlands by 58 runs. Scotland posted 255 in the last game as their both openers Coetzer and Munsey made the partnership of 200 runs. The Netherlands lost wickets on a regular basis and the pressure of the run-rate offered him a defeat in the high scoring game. As per current form, Scotland will be favorites to win this game.

IRE vs SCO Pitch Report: Ireland and Scotland T20 will be played at the Village ground, Dublin. The surface is now a fine batting track. Scotland scored 255 in the last game and Netherlands still managed to score 197 despite losing early wickets. Chasing sides still have an advantage.
Average Score (Last one year) – 215
Chasing side record – Won 6, Lost 4

IRE vs SCO Time Details: Ireland and Scotland game will start at 6 PM IST on September 17, 2019.

IRE vs SCO Broadcasting Details: Ireland and Scotland game will not be telecasted in India. The live stream will be available on the Fan Code App.

Ireland
Paul Stirling – Paul Stirling is in good form as he recently played for Middlesex in T20 Blast.  He also scored 224 runs in 5 innings in Zimbabwe home-series.
Mark Adair – Mark Adair picked 10 wickets in 5 matches against Zimbabwe in last home-series. He picked 6 wickets against England in Lord’s Test too.

Scotland
George Munsey – Munsey is in terrific form with the bat. He was in top form in Global T20 Canada and made a good start of T20I with a stunning hundred in last game.
Kyle Coetzer – Coetzer is an experienced player in the Scotland team. He scored 89 runs in the last game against the Netherlands. He will be a vital player for this game. 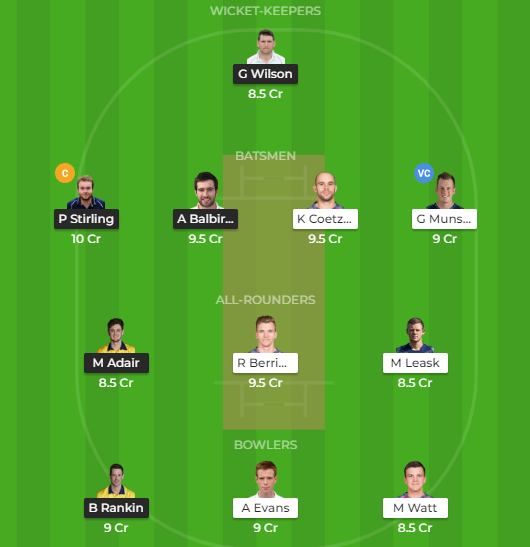 Catch all the live updates of IRE vs SCO Cricket Match, including live scores and match report. This time IRE vs SCO Dream11 Prediction will depend on the final team line-ups.