BAN vs ZIM Dream11 Prediction: Bangladesh and Zimbabwe will meet again in the fourth match of T20I tri-series. Zimbabwe and Bangladesh both lost their last game against Afghanistan. Zimbabwe has the last chance to stay alive in the series as they lost both games. Bangladesh also needs to fix their batting issues. Their batting collapsed in both games. The first game, Afif Hossain saved the game for Bangladesh but the team couldn’t convert it into the second game. Bangladesh has called up two players in the squad. Mohammed Naim, Rubel Hossain and Aminul Islam will join the team for the rest of the series.

BAN vs ZIM Pitch Report: Bangladesh and Zimbabwe game will be played at Zahur Ahmed Chowdhury Stadium, Chattogram. The surface is a nice batting track and spinners will get help later in the game. Chasing is tricky on this surface but we also have seen some good chases in the last few years. Above 160 will be a good total while batting first.
Average Score – 143
Chasing side record – Won 3, Lost 2

BAN vs ZIM Time Details: Bangladesh and Zimbabwe game will start at 6 PM IST on September 18, 2019.

BAN vs ZIM Broadcasting Details: Bangladesh and Zimbabwe game will be telecasted on Star Sports. The live stream is available on Hotstar.

Bangladesh
Afif Hossain – Afif Hossain came as a surprise package for Bangladesh. He played a match-winning knock of 52 against Zimbabwe when the team was struggling at 60/6. He will be a vital player at the lower-order.
Mahmudullah – Mahmudullah is a quality player and was top-performer in the last game with 44 runs. He is an experienced player for Bangladesh.

Zimbabwe
Ryan Burl – Burl is the new aggressive batsman from Zimbabwe. He played a good knock of 57 against Bangladesh. He scored vital 25 against Afghanistan. He also provides bowling options in middle-overs.
Masakadza – Masakadza is the captain and the experienced player of Zimbabwe. He was in good touch against Bangladesh as he scored quick 34. He has the caliber to play a big knock. 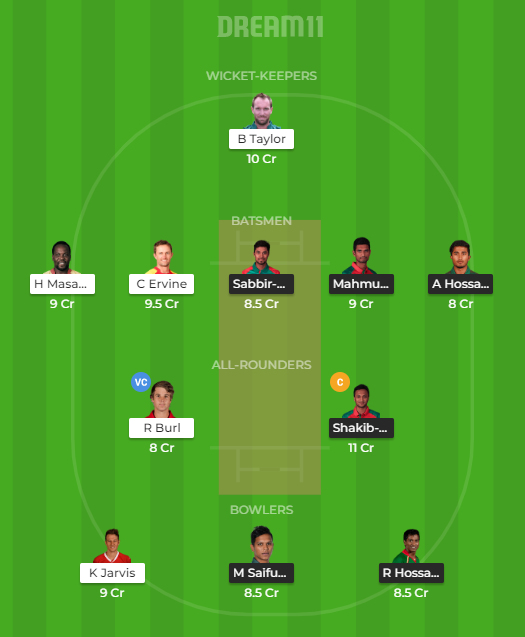 Catch all the live updates of BAN vs ZIM Cricket Match, including live scores and match report. This time BAN vs ZIM Dream11 Prediction will depend on the final team line-ups.