ATH vs BAR Dream11 Prediction: In the season opener of La Liga, Champions Barcelona will take on Athletic Bilbao in an away game. Bilbao ended their last season in the middle of the table and this season they would be hoping to better their chances for at least a top 5 finish. Barcelona will be playing their opening game without Lionel Messi who is injured; this will be a perfect opportunity to try out different combinations at the start of a very long season.

Barcelona had a near-perfect pre-season, losing just one game. Bilbao too had a good pre-season, faring well against different opposition in different conditions, and might offer a good test for the visitors.

ATH vs BAR Match timing & Match Details: The match is scheduled to start at 12:30 AM IST, on 17th August 2019.  The two teams will meet at the home of Athletic Bilbao, Sam Mames.

ATH vs BAR Broadcast Details: The Athletic Bilbao vs Barcelona game will not be telecasted in India. There is no official live stream of the match either, however, live score updates shall be available.

Barcelona
Antoine Griezmann – The Frenchman will be playing his first game for Barcelona. With Lionel Messi not playing the first game, this is a perfect opportunity for the forward to get in the eyes of fans and prove his transfer right.
Ivan Rakitic – The Croatian midfielder had a decent last season and he will be hoping to start off this season on the right note. He is the X-Factor of the Barca camp.

Athletic Bilbao
Inaki Williams – The 25-year-old Spanish has been a regular player in the side for some time now and will be expected to play a key role in this season as well.
Raul Garcia – The midfielder is one of the experienced players in the side and the team banks on his presence in the middle. The playmaker is expected to help his team carry on throughout the season. 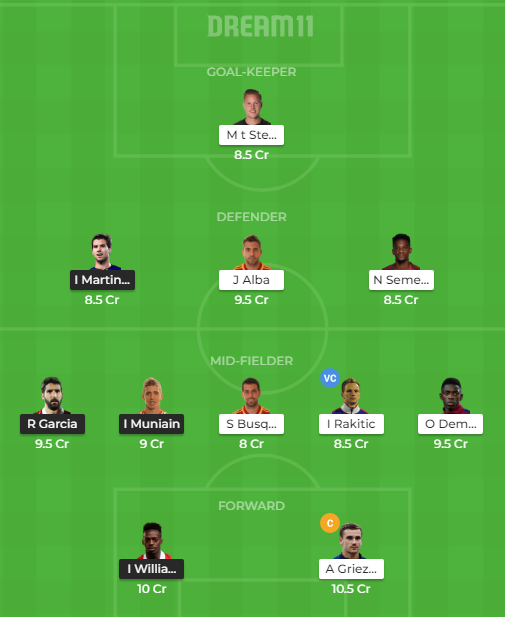 Catch all the live updates of ATH vs BAR Football Match, including live scores and match report. This time ATH vs BAR Dream11 Match Prediction will depend on the final team line-ups.