WI-W vs IN-W Dream11 Prediction: West Indies Women and India Women will kick start the ODI series in Guyana when both teams will square up against each other in the first ODI.

India has been showcasing a phenomenal run in the limited-overs format, winning both ODI and T20 series against South Africa at home. Mithali Raj will lead the side in the ODI series.

Hayley Mathews is likely to miss this game due to suspension. Stafanie Taylor came back from WBBL to lead the side at home.

West Indies Women vs India Women game will be played at Sir Vivian Richards Stadium, Guyana. The surface is a decent cricket track. West Indies men’s team defended 189 against India last time. The ground also hosted two games of West Indies-Australia women series where Australia posted 300 easily and defended too. It’s a track where your batting will be tested. Indians can enjoy this pitch if they bat first. It’s a slow surface but has plenty of batting help with the pitch.

Stafanie Taylor is the most valuable player on this side. She has recently played in WBBL and Kia Super League. She was the only top-performer in Australia series. She bats at number 4 and gives a full spell of 10-overs.

Chinelle Henry is an all-round player. She got some runs in the last series and picked 2-3 wickets as well. She can give valuable points in Dream11.

Deepti is in terrific form and she is leading wicket-taker for India in all formats. She had an impressive South Africa series, producing economical spells. She can also bat in middle-overs. Her all-around performance makes her a key player.

Mithali Raj is an experienced player and after the big break, she had a good comeback in the last series. She scored 66 in the 2nd match where she put up a good stand with Punam Raut.

Differential Players (Players who can be impactful in H2H and Small League): B Cooper, P Raut, C Henry, P Puniya 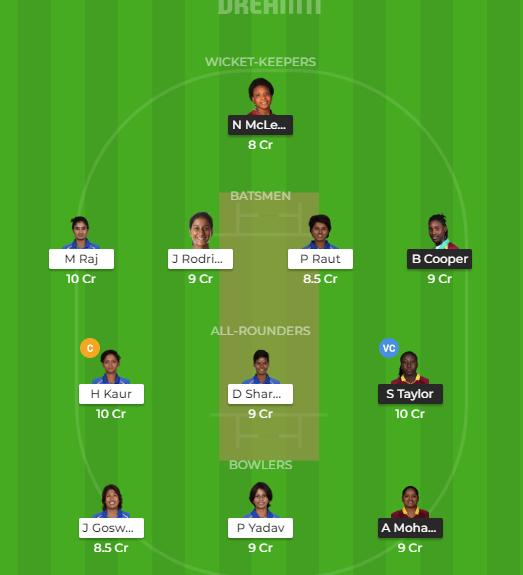