India Women will kick start their WT20 preparation against West Indies in the first match. India recently beat West Indies in the ODI series by 2-1. India are in good form in the shorter format of the cricket. They have beaten the South African side in the T20I series at home. India have also called up Shefali Verma and Radha Yadav for this series. Harmanpreet Kaur will lead the side. Indian bowling line-up will be tested in the T20 series.

West Indies Women are the better T20 side as compare to India. They have already won the WT20 in 2016. Mathews is back in the side and Stafanie Taylor is in top-class form. West Indies recently lost the T20 series against Australia and England but they were the top sides in the world. Windies can surprise India in the T20 series.

West Indies Women vs India Women game will be played at Daren Sammy National Cricket Stadium, St Lucia. This ground hosted few games in CPL as well where we saw some low-scoring affairs. It’s a good batting track in night games but in the day, spin makes a clear impact. The ground is very slow and after two games, a low-scoring affair is predicted. Spin will play an important role. Batting first is an ideal call after winning the toss.

West Indies Women and India Women game will be telecasted on West Indies Cricket’s YouTube Channel. In India, you can live stream this match on Fan Code App.

Stafanie Taylor is in terrific form. She is one of the best T20 players in modern cricket. She bats at number 4 and also provides the bowling quota of 4 overs. She scored 193 runs in the ODI series at an average of 64.33.

Mathews is back in the squad after the ban. She has performed very well in Kia Super League with bat and ball. Mathews picked 3-wickets haul in the last ODI game against India. She has the experience of T20 cricket. She was also part of WBBL in Australia.

Jemimah Rodrigues is in good form in the T20 format. She was the 2nd leading run-getter in Kia Super League. She scored 401 runs in 10 innings at an average of 57.28. She also scored a hundred in the league. 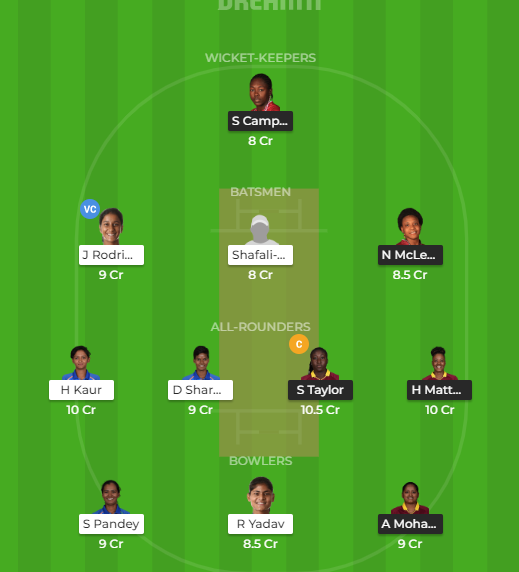