Sydney Sixers started off their campaign in style and were the table topper at one stage. They won 4 of their initial five matches on the back of some terrific performance by their skipper Ellyse Perry and wicket-keeper Alyssa Healy. Since then, Sixers have lost 3 of their five matches thus finding themselves at the third position in the table. Though there has been a slight shift of momentum, Sixers are still in a very healthy position. Ellyse Perry would not be available for this match due to an injury, but will feature in the knockouts.

Interestingly, Perth Scorchers have the same number of points as of Sixers and are placed just below them. The difference is in the momentum. The recent victory against Melbourne Stars was their fourth win in their recent 5 matches. Sixers have lost consecutive matches and will look on to clinch this in the absence of Perry.

The 43rd Match of Women’s Big Bash League between Perth Scorchers Women and Sydney Sixers Women is scheduled to take place on 23rd November at Lilac Hill Park, Perth. The match will commence from 7:30 AM (IST) onwards with live telecast on Sony Six and live streaming on Fan Code. Scoreboard details will be available on Official Websites.

Amy Ellen Jones, the wicket-keeper opener for Scorchers is currently the leading run-getter of the team and feature in the list of top 5 run-getter in the ongoing season. The 26-year-old has amassed 330 runs at a decent average of 36.66. With three fifties including 70 runs knock against Stars in the last match, Jones is the hot pick for Perth.

Meg Lanning, the skipper of Scorchers, is just behind Jones with 310 runs under her belt in 10 appearances. Just like her opening partner, the Australian stalwart has struck 3 fifties including 68 runs knock last time out.

Alyssa Healy has been in the form of her life this year. After scoring loads of runs in bilateral series this year, Healy continued her good form in Big Bash. The 29-year-old has struck 297 runs till now including a fiery ton against Stars. In the absence of Perry, the onus is on Healy to bat till the end.

Dan Van Niekerk, another veteran in this star-studded side, has not performed as per the expectations till now. But seems to have saved her best for the time when it will matter the most. Having scalped 7 wickets till now, Sixers would be hoping some excellence from her bat as well to strengthen their middle order. 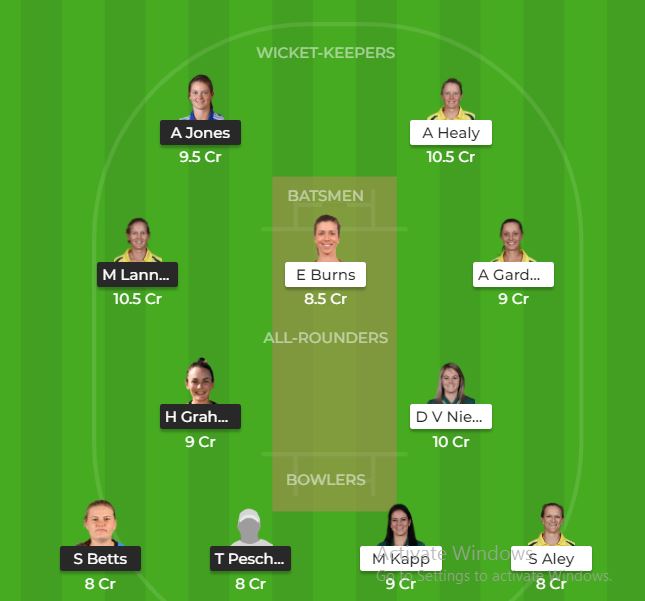