Delhi Bulls will collide with Maratha Arabians while Qalandars will lock horns with Karnataka Tuskers before they face each other on Friday. With just one win in four matches, Delhi Bulls finds themselves at the bottom of the table. Qalandars finds themselves in sixth position due to slightly better NRR than Bulls.

Both the teams need to find their winning eleven before it gets too late. Delhi Bulls slammed the current table topper Deccan Gladiators comfortably in their very first match. But since then, they had faced two loss and a tie which lossen their grip on the tournament. Similar is the situation of Qalandars. They initally won a match after starting off with a tie. But then lost consecutive matches to slip to bottom half of the table. This match is going to be extremely crucial for both the teams.

Eoin Morgan has been in a classy touch till now. Striking at 200, the Southpaw has now 152 runs under his belt in just 4 innings. With two fifties in the season, the skipper wants some to support him to help Bulls to knockouts.

Mohammad Nabi, who recently joined the team, hasn’t been at his best thus far. Having done decent job with the ball, the team would expect something special from him with the bat as well. The Afghani all-rounder has scalped 2 wickets at a decent economy of 8.50 thus far.

David Malan is the new rising star in T20 cricket. In the recently concluded T20 series, the Southpaw smashed the fastest century ever for England in the format. The 32-year-old is also the leading run-getter for his side thus far with 115 runs under his belt. Having played some good knocks, Malan is yet to produce a match winning innings.

George Garton is the consistent performer for Qalandars with the ball. The 22-year-old has scalped 7 wickets in 4 matches with a good economy of 8.28. Team will hope similar performance from him ahead. 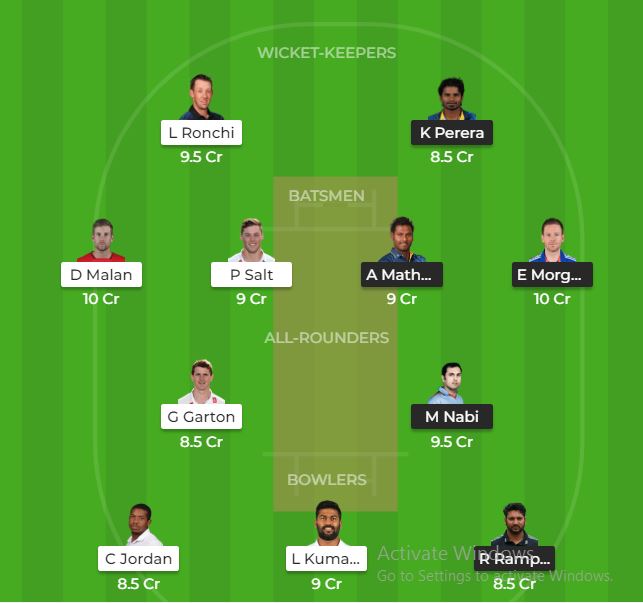