BEN vs HYD Dream11 Prediction: Match 38 of the Vivo Pro Kabaddi League will see Bengal Warriors lock horns with Telugu Titans. Bengal Warriors who started on a good note have managed to win 3 out of their 5 games are placed at seventh position in the points table. While Telugu Titans tasted their first victory of the season by defeating Gujarat Fortunegiants.

Bengal Warriors: After losing in a grappling match against Bengaluru Bulls by 42:43, their captain Maninder Singh decided to experiment the bench strength for the next match. Right cover defender Jeeva Kumar and Iranian raider Mohammad Taghi were given a go against U Mumba but failed to perform as per the expectations. However, the team still won the thrilling game against U Mumba. The team is still one of the favorites and their vying performance will create more excitement and hype during the course of the tournament.

Telugu Titans: Telugu Titans haven’t had a good start to this season of PKL, the side finally managed to win their first game in the seventh match. Titans won their last game against Gujarat Fortunegiants with their adroit game plan that clicked for the side. The side finally tasted a well-deserved victory. Defender Vishal Bhardwaj being a defender proved to be calm yet aggressive player for his side as he led his side towards victory in the last game. Raider Siddharth Desai complemented him very well during the course of the game. Placed at the last position in the team rankings, Titans will not look drop their guard in the upcoming games.

Bengal Warriors Top Players
Maninder Singh- The stylish captain has been delivering like a true leader for the team. So far he has 45 points in this season. He will grab any opportunity offered by the opposition during the gameplay.
K Prapanjan- The raider who was the top performer for his side in the last game will be an automatic inclusion for the next game. He has 30 points in as many as 5 matches he has played for his side this season.

Telugu Titans Top Players
Vishal Bhardwaj- The former captain and a well versed right corner defender has 24 points in 7 games which is pretty good for a defender. He is a key player for his side and has made himself a compulsory inclusion in the squad.
Siddharth Desai- The aggressive raider who is having a golden run despite his side’s back to back losses has 48 points in just 7 games and is also very close to hitting 50 points this season. He is the key player for his side on any day.

BEN Vs HYD Match Prediction: This stirring encounter of both the teams will bring in tough competition as both the teams look balanced but Bengal Warriors have an edge over the Telugu Titans following their better record in this season and also the fact that they have consistent performers. They surely have an upper hand. 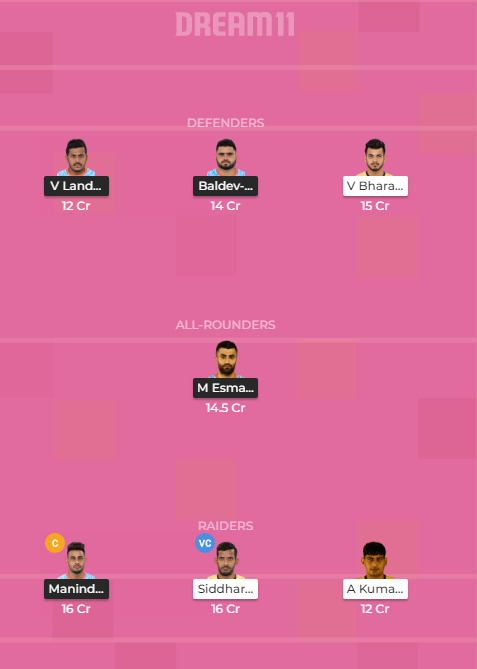 Catch all the live updates of BEN vs HYD Kabaddi Match, including live scores and match report. This time BEN vs HYD Dream11 Match Prediction will depend on the final team line-ups.