Telugu Titans is a kabaddi franchise based in Hyderabad and Vishakhapatnam and came into inception during the inaugural season of Pro Kabaddi League. The team is captained by Vishal Bharadwaj and coached by Mr. Gholamreza Mazandarani and Mr. Jagadeesh Kumble and play their local matches at Rajeev Gandhi Indoor stadium and G. M. C. Balayogi SATS Indoor Stadium when in Hyderabad. The franchise has played a total of six seasons and have reached the play offs once twice in season 2 and 4 respectively. The fans are hoping that the franchise could bring a turn around this time and win their maiden Pro Kabaddi League title.

Season 1 (2014)
Telugu Titans started off the season with a lot of promise, but in the end, pressure got the better of them as they missed the chances of reaching the play offs by a whisker, finishing fifth in the group stage standings. They played a total of 14 matches, won 6 and lost 5 matches, while 3 matches resulted in a draw. The team ended with 42 points.
Best Raider– Rahul Chaudhari (123 raid points in 14 matches)
Best Defender– D.Gopu ( 20 tackle points in 15 matches)

Season 2 (2015)
Telugu Titans rose like a phoenix from the Ashes and reached the play offs, finishing second in the team standings. They played a total of 14 matches, winning 8 of them, losing 3, while 3 resulted in a draw. The team ended with 50 points in the bank.
Best Raider– Rahul Chaudhari (75 raid points in 14 matches)
Best Defender– Sandeep Kandola (55 tackle points in 16 matches)

Season 3 (2016)
Telugu Titans continued the good form in season 3, but couldn’t absorb the pressure when needed the most and missed the chances of reaching the playoffs by an inch, yet again finishing fifth in the team standings. They played a total of 14 matches, of which they won and lost 7 apiece, ending the season on 38 points.
Top Raider– Rahul Chaudhari (77 raid points in 13 matches)
Top Defender– Dharmaraj Cheralathan (28 tackle points in 14 matches)

Season 4 (2016)
Season 4 was actually the season of Telugu Titans as they were on the verge of winning their maiden title in 2016, but finished the journey as runners-up with Patna Pirates proving to be just too good for them. They played a total of 14 matches, won 8 matches, lost 4, and 2 resulted in a draw. The team could accumulate 50 points during the course of the season.
Top Raider– Rahul Chaudhari (110 raid points in 16 matches)
Top Defender– Sandeep Narwal (40 tackle points in 16 matches)

Season 5 (2017)
Calling season 5 a disappointment for Telugu Titans wouldn’t be wrong as Telugu Titans performed below par, failing to reach the play-offs and missing the mark by quite some distance. With four new teams- Gujarat fortune Giants, Haryana Steelers, UP Yoddha and Tamil Thailaivas, the format became zone wise and the Titans finished fifth in their respective zone. They played a total of 22 matches, and could only manage 7 wins. They lost, while 3 of their matches ended in a draw.
Best Raider– Rahul Chaudhari (159 raid points in 22 matches)
Best Defender– Vishal Bharadawaj (68 tackle points in 22 matches)

Season 6 (2018)
Season 6 was a mixed bag for Telugu Titans as they showed some spark early in the tournament, but eventually lost the momentum and finished last in their respective zone. The new format hasn’t quite been to the taste of the side. Of a total of 22 matches played, Titans won less than one-third of their games,8, and lost 13 matches. One match also resulted in a draw. The team ended with 51 points.
Best Raider– Rahul Chaudhari (136 raid points in 21 matches)
Best Defender– Vishal Bharadawaj (51 tackle points in 17 matches)

Pro Kabaddi’s Toughest Week Begins: The Top Six Teams Battle It Out For The Title 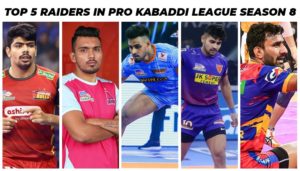