PHI vs UTA Dream11 Prediction: The NBA 2019-20 regular season basketball match will be a cross-conference contest between the Philadelphia 76ers of the Eastern Conference and Utah Jazz of the Western Conference. The Utah Jazz is on the road for their 12th match-up against Philadelphia on Tuesday. Utah Jazz owns a 55-45 edge in the all-time regular-season overall matches between both sides.

Philadelphia 76ers are coming off after defeating Indiana Pacers in their last match on what was a very narrow win for the home side. The final scorecard of the match was 119-116 as Joel Embiid charged through to lead the side by scoring 32 points including 11 rebounds and 4 assists. The 76ers enter this game tied for second place in the Atlantic Division with Boston Celtics, one game behind the Toronto Raptors. The 76ers are 18th in the league in the offense as they average 108.9 points per game in the regular season. The 76ers are 6th in the league in scoring defense as they allow 104.2 points per game this season. Joel Embiid leads Philadelphia with 22.8 points, 12.3 rebounds and 2.7 assists per game on the year. Tobias Harris puts up 18.1 points plus 7.1 boards a game, Ben Simmons adds 12.9 points, 6.9 rebounds, 8.4 assists, and 2.3 steals, while Al Horford (14.4 points, seven rebounds). Josh Richardson is suffering from pulled hamstring so he is undecided for this game.

Utah Jazz is on the road and this match is going to be their fifth game in the last eight days. They ended up losing against the Toronto Raptors by 110-130 today. This match against Philadelphia will be their last road game before they fly back to their home to play the home matches for the next few days. Utah Jazz is maintaining the record of 4-6 on the road and they average 103.1 points in those games while allowing 104.4 points per game as the visiting team. The Jazz comes into this game 24th in the league in scoring offense with 106.6 points per game this season. Utah is fifth in the league in scoring defense as they allow 103.9 points per contest. Donovan Mitchell leads the Jazz with 25.3 points plus 5.1 rebounds and 3.7 assists per contest this season. Bojan Bogdanovic averages 22.1 points per contest while Mike Conley (13.9 points, 4.6 assists) and Rudy Gobert (13.4 points, 13.9 rebounds, two blocks) are solid contributors. They have a decent chance of defeating Philadelphia if the likes of Bojan Bogdanovic and Mie Conley play with a winning intent.

The basketball match between Philadelphia 76ers vs Utah Jazz will be played at the venue Wells Fargo Center, Philadelphia. The capacity of the Arena has around 19,500 spectators.

The basketball match between Philadelphia 76ers vs Utah Jazz will start at 5:30 AM IST on December 3, 2019, Tuesday.

The basketball match between Philadelphia 76ers vs Utah Jazz will be broadcasted in India on the Sony Sports Network. You can also watch it online on the SonyLIV app. Live Score & Streaming will also be available on the NBA official website.

Philadelphia 76ers: Josh Richardson has been listed day-to-day by the team management due to his hamstring injury and his inclusion/exclusion will be decided before the match.

Utah Jazz: No such news of injury or suspension. 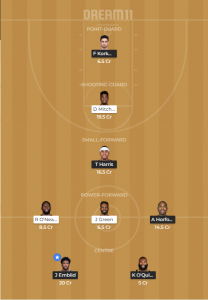