PHI vs IND Dream11 Prediction: The Eastern Conference basketball match of the NBA 2019-20 regular season will be played between the Philadelphia 76ers vs Indiana Pacers in the home arena of the fifth-placed Philadelphia Pacers on Sunday. In their last four regular-season meetings, Philadelphia rules the head-to-head contest by 3-1.

The Philadelphia 76ers are in a fine form of five wins in the last six games. Following a narrow road loss to the Toronto Raptors, the Sixers bounced back with a home win over the Sacramento Kings. Philadelphia improved to a 12-6 record and is in the 5th place in the Eastern Conference. Philadelphia boasts of a good home record of 8 wins and no loss till now as they will be hosting the Pacers on Sunday. The 76ers are coming after defeating Sacramento Kings by 97-91 in the last match and Philadelphia was led on offense by Joel Embiid. Embiid also added 16 rebounds, which gave him a double-double for the game as he has been a key player for the side. This season, the 76ers have the 18th offense in the NBA across bothe the conferences that average 108.7 points per game, and they are facing the Pacers’ 4th defense that allows 103.8 points per contest. The Sixers are 6th in rebounds with 47.2 and 5th in assists with 26.4 per game.

The Indiana Pacers will be hitting the road for a matchup with the Philadelphia 76ers who are just one place above them in the Eastern Conference. The Pacers have a record of 12 wins and 6 losses in the regular season with major dominance in the home games having maintained a good home record of  9 wins and just 2 losses. But for this game, they will be flying to Philadelphia for their road game. Pacers are coming after winning 121-102 over the Utah Jazz in their last match. In the Pacers win over the Jazz, Indiana was guided on offense by Domantas Sabonis.  Sabonis tallied a double-double on the night, recording 23 points and 12 rebounds. T.J. Warren also scored 23 with two steals, Malcolm Brogdon added 22 points and game-high eight assists, while Jeremy Lamb chipped in 18 points, eight boards, and six dishes. This season, the Pacers have the 17th offense in the NBA that averages 109.5 points per game, and they are facing the 76ers’ 5th defense that allows 104.1 points per contest. The Pacers are 12th in rebounds with 46.1 and 10th in assists with 25.3 per game.

The basketball match between Philadelphia 76ers vs Indiana Pacers will be played at the venue Wells Fargo Center, Philadelphia. The capacity of the Arena has around 19,500 spectators.

The basketball match between Philadelphia 76ers vs Indiana Pacers will start at 5:30 AM IST on December 1, 2019, Sunday.

The basketball match between Philadelphia 76ers vs Indiana Pacers will be broadcasted in India on the Sony Sports Network. You can also watch it online on the SonyLIV app. Live Score & Streaming will also be available on the NBA official website.

Philadelphia 76ers: Josh Richardson (Hamstring injury), Kyle O’Quinn (Calf injury), and Al Horford (rest) are expected to be back after December 1. While shooting guard player Shake Milton is listed day-to-day by the team due to illness.

Indiana Pacers: Victor Oladipo (Knee injury), Edmond Sumner (hand injury) are expected to be out until December 9. JaKarr Sampson (back injury) and Naz Mitrou-Long (illness) have been listed day-to-day by the team management. 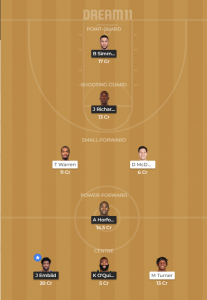