The side would be high on confidence after beating Atlanta Hawks in their previous game by 135-127. They are doing good in their on-road game as they are entering into this contest leading the Central Division by three games over the Pacers. Milwaukee was up eight after the opening quarter but trailed by three at the half. The Bucks outscored Atlanta 38-22 in the third quarter to take a 13-point lead and didn’t let Atlanta get close. Milwaukee was guided by Giannis Antetokunmpo. Antetokunmpo recorded a double-double in the game, registering 33 points with 11 rebounds and 4 assists. The Bucks are 2nd in the league in scoring offense with 118.5 points per game on the season. Milwaukee is first in rebounding by pulling down 52.2 boards per contest while the team is 15th by dishing out 23.9 assists per game. The Bucks are tied for 14th in the league in scoring defense as they allow 109 points per contest this season. Giannis Antetokounmpo leads Milwaukee with 30.3 points, 14 rebounds and 6.2 assists per contest this season.

The basketball match between Milwaukee Bucks vs Portland Trail Blazers will be played at the venue Fiserv Forum Milwaukee. The Arena can hold around 17,500 spectators.

The match between Milwaukee Bucks vs Portland Trail Blazers will start at 6:30 AM IST on November 22, 2019, Friday.

The match between Milwaukee Bucks vs Portland Trail Blazers will be telecasted in India on the Sony Sports Network. You can also watch it online on the SonyLIV app. Live Scores & Streaming will also be available on the NBA official website.

Milwaukee Bucks: Forward player Khris Middleton is expected to miss the next several weeks due to his injury and might return by mid-December. No other news of injuries or suspension from the side.

Portland Trail Blazers: Damian Lillard is expected to miss the game due to back injury. Otherwise no other news of injuries or suspension from the team dugout. 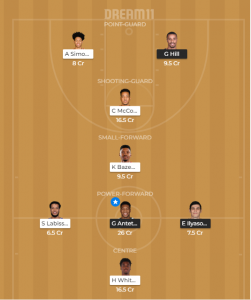