LIV vs GENK Dream11 Prediction: Genk is facing a horrid season. The team is struggling in both the league and the European campaign. Genk has played three games without winning any of them. The Belgian club has just one point and is residing at the last spot in a group of four teams. Another defeat could end all their hopes for another European game this season.

Liverpool, on the other hand, is having a dream season. The team is leading the League campaign and looks favourite to lift the title. The loss to Napoli was a disappointment, but the Reds will look to seal their berth in the knockouts with another win.

The two teams will face each other for the fourth game of their campaign. The game will be played at Liverpool’s den in Anfield. The game will start at 1:30 AM on 6th November 2019.

The match will be broadcasted live on the Ten Sports network. The game can also be viewed live streaming on Sony Liv. Official websites will update the live scores.

LIV vs GENK: Head to Head:

Liverpool and Genk have faced each other only once in the Champions League. The Merseyside team won that game convincingly.

M.Salah and Sadio Mane: The duo of Sadio Mane and M.Salah won Liverpool, the champions league last year. Both the players seem unstoppable. The pace on the wings which the two players provide is deadly to handle for any organization. The players have shared five goals amongst them in 3 starts apiece.

Sadio Mane has scored two goals in three games, whereas Salah is slightly better with three goals and one assist in the same number of games.

Robert Firmino: The Brazilian is often the most underappreciated player in the deadly attacking trio of Liverpool. However, Firmino has continuously proven that he is the heartbeat of the team and is the starting point of almost every Liverpool attack. The striker has three assists in three games.

Sander Berge: Robert Firmino could be the key for Liverpool in the game against Genk. However, one player who could be given the responsibility of keeping Firmino quiet is Sander Berge. The defensive midfielder will have to act like a wall in front of the back four for Genk. If Berge manages to curtail Firmino, Genk can hope for an upset. The 21-year Norwegian, on average, makes 0.5 successful tackle per match.

J.Maehle: The wing-back could be another key player for Genk if they want to stop Liverpool’s attack. The right again makes three tackles, 1.3 clearances, and 2.3 successful interceptions per game. He could be the key to hold the pair of Salah and Mane along with the dangerous wingbacks of Liverpool. 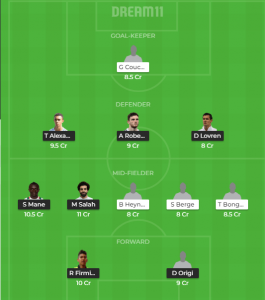