The 30th match of Super50 Cup 2019-20 will be played between the Leeward Islands and Canada at Warner Park.

Leeward Island are coming off with an important win against CCC by 6 wickets. Their bowlers put a good show and restricted CCC on 191/9 and later, Devon Thomas and Hamilton helped Leeward to secure 4-points. They lost their match against Barbados with a big margin of 9 wickets and the margin hurt Leeward in the NRR. After the win in the previous game, they are at number two in the table and they have the advantage over Canada.

On the other side, Canada who got their first win against Combined Campuses and Colleges, lost their previous encounter against Jamaica. After Nitish Kumar’s 42 and Thaker’s 60, Canada posted a good total of 244 in 50-overs. Jamaica chased the target with 4 wickets in hand. Canada is now on the verge of elimination as they have to win all games and have to rely on other team’s results.

LEI vs CAN Dream11 Pitch Report

The Leeward Islands and Combined Campuses & Colleges game will be played at Warner Park in Basseterre, St Kitts. In the last game, Jamaica scored 331 and Barbados also crossed 300 while chasing. The surface is good to bat. The first few overs are crucial against pacers. It’s a decent batting surface and provides a balance between bat and ball.

LEI vs CAN Time Details

LEI vs CAN Broadcasting Details

The Leeward Islands and Canada game will not be telecasted on any platform. Live streaming will be available on Windies Cricket’s YouTube channel and Fan Code App.

LEI vs CAN Squads

LEI vs CAN Probable XI

LEI vs CAN Dream11 Best Players

Kieran Powell is one of the leading run-getters of this season. He has scored 348 runs in 6 innings at an average of 81.75. He scored 88 against Jamaica and 121 against Barbados on the same ground. He will be a vital pick in the Dream11 as he failed in just one game where he scored 21. He scored 30 plus score in every game.

Devon Thomas is also in good form as he has scored 272 runs in 6 innings at an average of 68. He scored 78 in the previous game while chasing. In the first game against Combined Campus, he scored a winning hundred.

Shahid Ahmadzai is also in good touch with the bat. He has scored 132 runs this season. He scored 73 runs against CCC to to put a winning stand with Nitish Kumar. He has also picked 4 wickets with an economy of 4.78.

LEI vs CAN Dream11 Dream Team 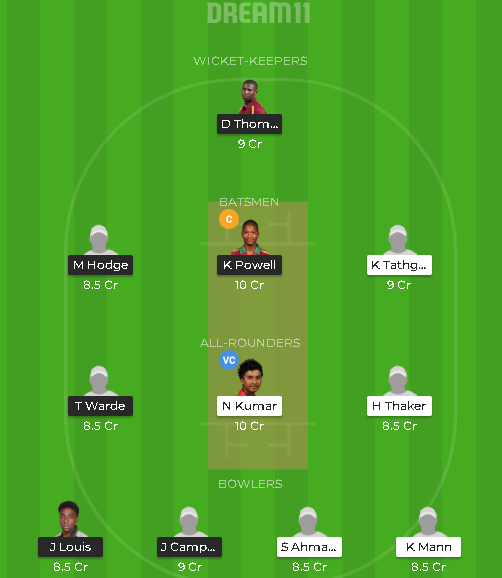