KEN vs NED Dream 11 Prediction: ICC World T20 Qualifier is starting from October 18 and the 3rd match of the day will be played between Netherlands and Kenya. The Netherlands recently played in Oman and Ireland, displaying a mixed performance. They lost so many games but they have quality players who can make things better in the ICC event.

On the other side, Kenya is an average side. They lost both warm-up games against Canada and Jersey. They have two-three major players in the squad and too much reliance on these might hurt them in this tournament.

Kenya and Netherlands game will be played at ICC Academy, Dubai. The surface is good to bat but it provides good help to spinners. As per the weather, the spin will be a key factor on this ground in the day game. Chasing sides has advantages in international T20s.

Kenya and Netherlands game will be telecasted on Star Sports. The live stream will be available on Hotstar.

Rakep Patel is an all-rounder and  a valuable player in this side. He has good numbers in T20s with both bat and ball.

Alex Obanda is a good attacking player in this side. He bats as an opener and his strike rate is also good. He scored 46 in the last game against Canada.

Doeschate is an experienced player in this side. He was also part of the Essex side in T20 Blast who won the T20 Blast title last month. He scored 269 runs in 13 innings at an average of 33.62.

Ackermann is an all-rounder. He was in good form in T20 Blast and also delivered in the recent T20 series. He is a wicket-taking bowler and effective on seaming conditions. 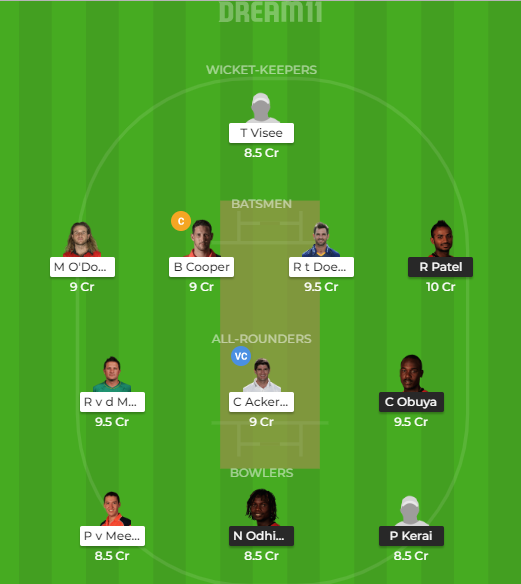