GUJ vs SAU Dream11 Prediction:  After a six-wicket defeat at the hands of Jharkhand, Saurashtra would be furious to get back on the winning note starting from the game against Gujarat at Surat. The Harvik Desai-captained side is currently placed at the 2nd spot in Group E rankings with a win and a loss each in the first couple of contests.  On the other hand, Gujarat is yet to compete in a contest that is unaffected by rain. Their past two matches were washed out before toss and as a result, the Parthiv Patel-led side is presently seated at the 3rd spot in Group E table with 4 points to their name. They would be anxious of a triumph in the coming duel, considering they vying for a place in the playoffs.

The match between Gujarat and Saurashtra will be played on November 11 at Lalabhai Contractor Stadium, in Surat. The live telecast will be available from 10:00 AM onwards on Hotstar and Star Sports Network.

The experienced campaigner shouldn’t be forgotten in almost any game of Gujarat in the ongoing season of Syed Mushtaq Ali contests. The wicket-keeper batsman has been one of the leading run-getters for Gujarat across domestic formats and remains one of the best in the business in terms of keeping the gloves for the same.

The left-arm pacer had a decent stint with the ball in the lately finished Deodhar Trophy contests. His ability to swing the ball both ways could trouble the batsmen at the start of the play, thereby attributing to his addition in GUJ vs SAU Dream11 team for the forthcoming duel.

Kishan’s 51-ball 54 was one of the primary reasons behind Saurashtra putting 160+ runs on board. The opener looked in a great nick in the lately concluded game with 2-sixes and 4-fours hit elegantly across the stadium.

Chirag Jani’s potency with the ball was put to witness in the previous game against Jharkhand. His 2/17 helped Saurashtra put the opposition in an uncomfortable spot. While he didn’t get a chance to bat on the occasion, in case the situation arises, he could be a match-winner for Saurashtra and who knows maybe in the game against Gujarat at Surat. 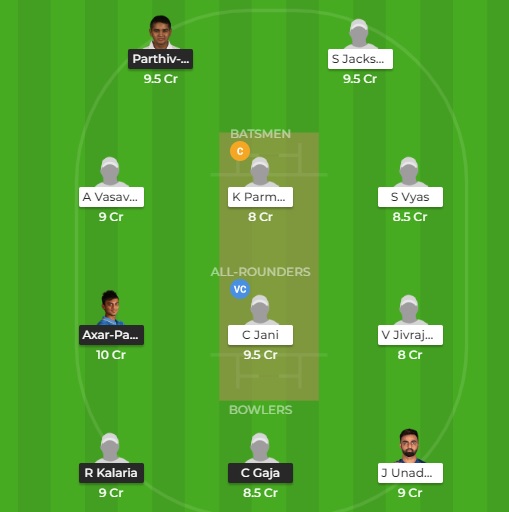