Table topper of the last week Cape Town Blitz has been moved to number 4 in the table with 13 points. They were terrific with their performance in the first four games as they won three games but defeats in the next three games made Cape Town’s journey frustrating. They lost against Paarl Rocks by just 2 runs and in the next match, Durban Heat beat them by 7 wickets. Lack of good bowling couldn’t defend 181 in their home game.  Cape Town needs just one win here to make their chances strong.

Tshwane Spartans are the unbeaten side in Mzansi Super league 2019. Their three games were washed out and in two games, they defeated Paarl Rocks and Jozi Rocks respectively. With commendable bowling performances, they beat Jozi Stars by 20 runs in the last game. After ABD’s 33-balls 53, Spartans scored 155 and restricted Jozi Stars on 135 in 20-overs.

Cape Town Blitz and Tshwane Spartans game will be played at New Lands, Cape Town. This is the home ground of Cape Town. The surface is a fine batting track. In the last game, Durban Heat chased down 182 with 7 wickets in hand. Pacers can also get help from the pitch. There is cloudy weather in Port Elizabeth but rain is not predicted. Toss is important.

Janneman Malan is the top-scorer of this season. He has scored 265 runs in 7 innings at an average of 43.66. He scored unbeaten 99 against Jozi Stars and 75 against Durban Heat. Malan might be a good choice to pick as a vice-captain.

Dale Steyn is the most valuable player in Fantasy. He is the strike bowler of Cape Town Blitz and the leading wicket-taker of his team. He has picked 12 wickets in 7 matches at an average of 18.08. He picks at least two wickets in each game.

Dean Elgar is the leading run-scorer for Spartans. He has scored 163 runs in 4 innings at an average of 81.50. He scored two half-centuries and his consistency is amazing.

AB de Villiers had a mixed season with only one half-century but he got that one knock in the last game. He was the leading run-scorer for Middlesex in T20 Blast. 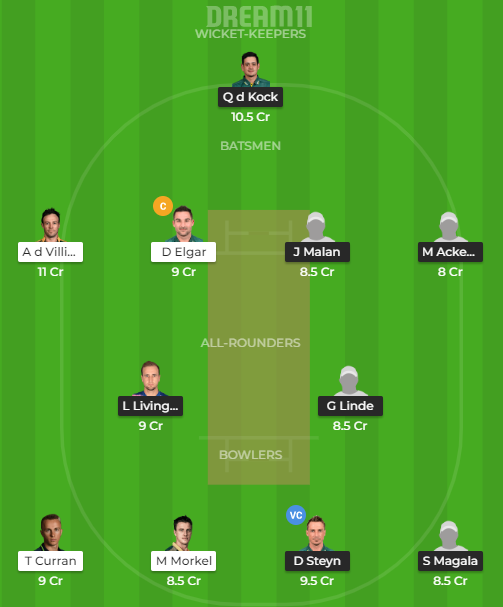