BD-ET vs HK-ET Dream11 Prediction:  The 4th edition of ACC Emerging Asia Cup will start on November 14. Group B’s 2nd game will be played between hosts Bangladesh and Hong Kong. Eight teams are divided into two groups and the top two teams from both groups will qualify for the semis.

Hosts are a strong side at home and they have included some international players. Few players were also playing NCL which is a domestic tournament of Bangladesh. Afif Hossain, Mohammad Naim, Soumya Sarkar, Mehdi Hasan, and Aminul Islam will also play this tournament who have recently toured India for the T20I series.

Hong Kong, on the other hand, have recently played in the ICC T20 World Cup qualifier. They finished 4th in the group and lost to Oman in a playoff game. They won 3 games out of four in the tournament.

Bangladesh Emerging and Hong Kong Emerging game will be played at Bangladesh Krira Shikkha Protisthan No 4 Ground, Savar. The ground is hosting the first game of the season. Bowling first will be a good call as per the new conditions. Bangladesh will have an advantage as they are fully aware of the conditions. The toss will be important and spin might be effective.

Bangladesh Emerging and Hong Kong Emerging game will start at 8:30 AM IST on November 14, 2019.

Bangladesh Emerging and Hong Kong Emerging game will not be telecasted on any platform. The live stream might be available on YouTube or Fan Code App.

Mohammad Naim is a young talent and has impressed in the last India series. Naim scored a brilliant inning of 81 in the final T20I while chasing. Naim is a top-order batsman and give extra points in Dream11.

Soumya Sarkar is an all-round player. He is also playing in the top-order. Sarkar has a good experience of international matches. Sarkar has scored 1728 ODI runs at an average of 33.88. He is also useful in the middle-overs with the bowl.

Kinchit Shah was in good form in the recent WT20 Qualifier, UAE. He was the top-scorer for Hong Kong as he scored 223 runs in 7 innings at an average of 37.16. He has scored two half-centuries.

Ehsan Khan is a quality spinner and Bangladesh’s track can help him. He has led Hong Kong’s bowling line-up on such tracks. Ehsan Khan can also bat at the lower-order. 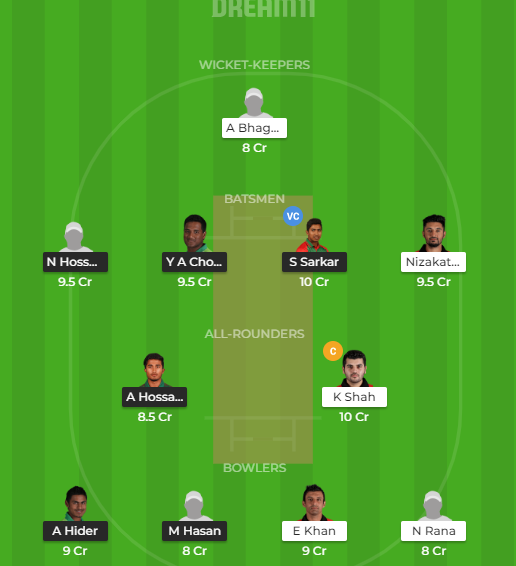