BAR vs SLPG Dream11 Prediction: Two teams are playing with different intentions, and their intentions become crystal clear on looking at the table. Barcelona is at the top of the table with two wins and one draw. The team has seven points, whereas Slavia Prague is languishing on the last spot with just one point of three games. A defeat against Barcelona could end their European dream for this season.

Barcelona will be looking to bounce back after a shocking defeat against Levante in La Liga.

The two teams will face each other for the fourth match of their campaign. The game will commence at 11:25 PM on 5th November. Camp Nou will host the tournament.

BAR vs SLPG: Head to Head:

Lionel Messi: The little maestro is undoubtedly the most prominent impact player in the World. The Barcelona team revolves around him and looks at a different team when Messi is around. The Argentinean has scored one goal and provided one assist in one start. Messi is fully fit after an injury and looks a certainty of getting on scores sheet.

Antonie Griezmann: The French forward has not fulfilled his potential since making his dream move to Barcelona from Atletico Madrid. However, the star player can turn any game on its head within minutes. The absence of Suarez and possibly Dembele with an injury will give Griezmann a chance to prove his mettle against a struggling defence.

Peter Olayinka: The Nigerian forward is one of the brighter prospects in an otherwise struggling attack of Slavia. The 23-year-old has one of the two goals which Slavia scored under his belt.

Tomas Suecek: The defensive midfielder often saves the Czech team from humiliation in games. He has been a wall in front of the defence line. If Slavia Prague has to contain the home side, Suecek will have to play an essential role. 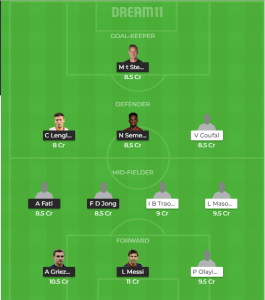