AUS vs SL Dream11 Prediction: Sri Lanka’s horrible tour continues as they lost both T20 games with a big margin. They will now meet Australia in the final T20 match of the series. Australia have already taken the lead of 2-0 and clinched the series. In the first game, Australia beat Sri Lanka by 134 runs after a splendid batting show by Warner, Finch, and Maxwell.

Sri Lanka lost the second game by 9 wickets as their batsmen delivered a poor show. Warner and Smith scored 60 and 53 respectively, helping Aussies clinch the series. Sri Lanka will now try their bench strength in the final game or they can try their best team to end this series on a happy note. Maxwell has pulled out of the ODI due to his mental health issues.

Sri Lanka and Australia game will be played at MCG, Melbourne. MCG is a big ground and the boundaries are longer as compared to other grounds. Batsmen need to put a lot of efforts to clear the boundary. MCG uses the drop-in pitch as well. The surface has nothing for spinners but pacers can get extra bounce from the pitch. It’s a competitive cricket pitch and the average score of this ground is 139. Batting first will be a good option.

Sri Lanka and Australia XI game will be telecasted on Sony Six. The live stream will be available on Sony Liv. Live scores are available on Sportz Craazy.

Malinga is a T20 specialist bowler and has been in good form. In the last two games, he has tried to manage that form but has taken a barrage of wickets. He will surely be the most important bowler for Lanka.

Kusal Perera is Sri Lanka’s important player as he has often helped his side win games singlehandedly. He had performed before on such tracks. He attacks with the first ball and his strike rate is 135.52 in T20Is.

Warner has started the Australian summer with a bang. He scored a hundred in the first game and match-winning 60 in the second game. His form in white-ball cricket is no less than magical.

Finch scored 64 off just 36 balls in the first T20, followed by a duck in the last game. He would still be count as one of the biggest bets in the match owing to his destructive nature of play. His numbers are terrific this year with the bat.

Differentials player (Players who can be impactful in H2H games): B Stanlake, A Agar, D Shanaka, D Short 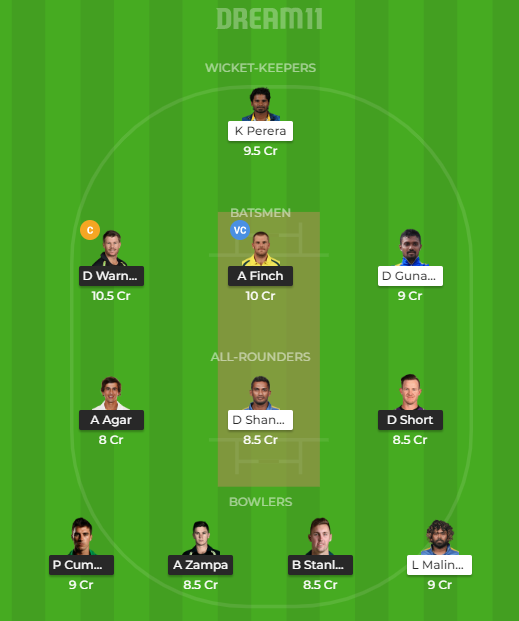