Arsenal play host to West Ham United at the Emirates on Saturday afternoon in a battle between two sides needing three points for entirely different reasons. The Gunners go into the weekend’s clash five points off fifth-placed Manchester United, while West Ham are only above the relegation zone on goal difference.

Mikel Arteta was welcomed with open arms back to the club where he spent five years between 2011 and 2016, but it has been a topsy-turvy start to life for the former Gunners captain in the Emirates dugout. Indeed, the North London outfit are unbeaten in the Premier League since the New Year, and have won four out of their last five matches in all competitions. Monday’s 2-0 win over Portsmouth in the FA Cup fifth round keeps Arteta’s hopes of a trophy in his maiden season alive, a win which was much needed following their defeat to Olympiacos in the Europa League round of 32.

Having reached the semi-finals of the Europa League in the 2017-18 campaign, and finishing runners up to Chelsea last year, many Arsenal fans believed that a European trophy and a route back to Champions League football could have been on the horizon for their side this season. The article will help with your dream11 team and dream11 prediction.

Arsenal’s league form has much improved since Arteta replaced fellow Spaniard Unai Emery, and the Gunners are now with 37 points just eight points away from breaking into the top four spots.

Arteta has already seen his side keep six clean sheets in all competitions since his arrival, with the centre-back partnership of Mustafi and Luiz garnering significant praise for their performances in recent weeks. A third consecutive league victory could see Arsenal rise to eighth in the table, potentially leapfrogging arch-rivals Tottenham Hotspur in the process should Burnley pick up all three points against Mourinho’s side on Saturday.

West Ham’s stunning 3-1 win over Southampton was their first league win since New Year’s Day, and David Moyes’s side are at a real risk of a first relegation since 2011 should results not improve.

As protests against the ownership of the club continue to bedevil the Londoners, Hammers supporters will be desperate to see their side pick up only their fourth win away from home all season. Moyes’ men performed great at Anfield last Monday, but eventually made the trip back down to London empty-handed following a result which has more or less epitomised their season. However, last weekend’s triumph against Southampton has brought some much-needed relief to the London Stadium, as goals from Bowen, Haller and Antonio comfortably saw off Hasenhuttl’s side.

Both teams will clash at the Emirates Stadium, the home of the Gunners on the 7th of March 2020 Saturday from 08:30 PM (IST).  Live scores of the match will be available at official platforms. Information below will help choose your Dream11 team and make your Dream11 prediction correct.

Saturday’s game represents the 142nd meeting between the two sides, with Arsenal recording 67 wins in comparison to West Ham’s 35. The Hammers were the first team to beat Arsenal at the Emirates in 2007 courtesy of a Bobby Zamora’s goal, but have fallen to defeat in their last four visits to North London 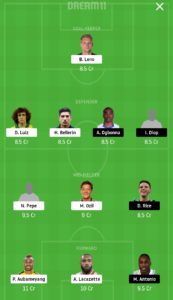