CHECK OUT SOME OF THE BEST CATCHES IN IPL 2019

In IPL 2019, there were many batting, bowling and fielding highlights for fans to cherish.

When Mumbai Indians were playing against Chennai Super Kings on season 12 of IPL, 2019, they won by 37 runs. Chasing 171, CSK struggled to maintain the partnership and one of the big wickets to fall was that of Suresh Raina who smashed a ball from outside off stump over the cover-point and was spectacularly taken by Kieron Pollard at the boundary line was one of the best IPL Catch of that season.

The shot was hit hard but pollard somehow timed his jump to perfection. His right arm fully outstretched, with the ball over his head and the pace pushing him backwards, Pollard grabbed the ball and didn’t let it fall as he fell backwards.

For this amazing leaping catch, Pollard won the Perfect Catch of the Season Award after Sunday’s IPL final.

IPL 2019, the first match of Kings XI Punjab, KL Rahul took a great running catch to get rid of the captain of Rajasthan Royals’ Steve Smith.

The Australian batsman chipped a ball from Sam Curran over mid-off. Rahul kept his eyes on the ball as he ran across the field to his left from long-off, timed his dive excellently and cupped the ball with two hands as he hit the grass.

One of the best player and fielder from South Africa, particularly when it comes to catches in the deep, CSK’s Faf du Plessis held some best catches in IPL 2019.

The best catch came in Chennai super king match against Royal challengers Banglore in Bangalore when Marcus Stoinis trudge at Imran Tahir but got a leading edge that flew high and down to long-off where du Plessis ran backwards and did not lose sight of the ball. But as it dipped on him, he realised that he was going to overbalance and fall across the boundary line, so as he got the ball du Plessis threw it to his right and Dhruv Shorey held on.

Sixes and Fours might make the news, but in Cricket, a good catch can be equally entertaining. But once in a while, cricketers manage to portray physics-defying flexibility and athleticism to pull off best catches in IPL, which could give even the best sixes a run for their money. Such unforgettable catches often live on in the memories of spectators, even when the greatest of sixes have plunged into oblivion.

The Indian Premier League, ever since its inception in 2008 has been a swashbuckling showcase of entertainment. More than anything, it has taken cricket – to be specific T20 Cricket – to greater heights of popularity in India and the World. Creating a list of the best catches in the history of the Indian Premier League is no mean feat, and some worthy contenders were bound not to make the cut.

True to the spirit of cricket that is the heart of IPL, there has been some worldly catches on display at the 11 seasons so far and today, we take a look at the seven very best of the catches in the Indian Premier League.

Ricky Ponting was known for his fielding abilities since his heydays and he was a part of a fabulous crop of Australian players who showed amazing agility on the field. Ponting was 40 years old during the 2013 edition of the IPL when he captained Mumbai Indians against Delhi Daredevils. Delhi, chasing a total of 209, started with Unmukt Chand to face the first ball of the innings from Harbhajan Singh. Unmukht’s leading-edge towards cover was about to roll away harmlessly when Ricky Ponting sprang into action and caught one of the best catches of the season, in a one-handed attempt that was his trademark.

Had the Indian Premier League ended after the 2014 edition, this would have been the all-time best catch of the IPL. Royal Challengers had reached the cusp of victory, they could see the finish line. They required 6 runs off 3 balls and had the one man everyone would want to have the strike in such a position – AB de Villiers. The South African, facing Vinay Kumar, gave himself some room and hit the ball to deep midweek. Enter Chris Lynn. The Australian batsman positioned himself in the boundary line but slipped right as he was setting himself up. Not to be let down, Lynn jumped, caught the ball and amazingly manoeuvred himself to escape the clutches of the boundary line. You would never get tired of the replays.

Another South African who is brilliant in the field, Faf du Plessis was stationed at mid-off during the Chennai vs Mumbai game in the 2015 edition of the IPL. Power-packed New Zealand all-rounder Corey Anderson, batting for Mumbai, faced a short delivery from Ashish Nehra, which he immediately sent straight and high down the ground. In an amazing act of concentration, du Plessis first ran sideways from mid-off and suddenly realized that he had misjudged the flight of the ball. In an attempt to adjust himself, he ran backwards, but realizing that he would not reach the ball in time, dived backwards to take a gem of a catch, that can be watched and re-watched all day long.

Combination catches have become quite common nowadays, but IPL spectators and the World saw a brilliant effort in the 2015 edition of the IPL. George Bailey looked to be on course to complete an incredible chase for Kings XI against Rajasthan Royal and it looked like he had hit James Faulkner for a six in the 19th over to long-on, but instead, he found Tim Southee there. Southee charged in and jumped over the ropes, caught the ball and flung it back into the field in one swift motion. Karun Nair had followed Southee to the fence and had been watching him in awe and got his contribution absolutely spot-on as he grabbed his team-mate’s offering and completed a fabulous relay effort.

The New Zealand fast bowler, a part of the Delhi Daredevils team, gave IPL 2018 its moment of magic in the game against Royal Challengers Bangalore. Virat Kohli was on the pitch, facing Harshal Patel. Kohli spotted a full toss from Patel early, and hit it to deep square leg, watching the ball go, expecting a six. He watched in awe as Trent Boult, stationed at the boundary line, stuck out his right hand, which is not his preferred arm, and grabbed the ball which was headed for the stands. It seemed impossible, but Boult was not done yet. With the ball firmly gripped in his hand, he somehow managed to turn and fall down on his stomach, with the boundary line just inches away. It was a sensational piece of fielding which drew praise from all over the world and sent the social media into a frenzy.

David Hussey took one of the catches of the tournament while playing for Kolkata Knight Riders, in the game against Delhi Daredevils. Collingwood had hit a flat one towards the long-on boundary and Hussey misjudged the ball at the boundary line. He miscued the ball over the boundary but in a flash had jumped out of the field. He parried the ball into the field while he was still in the air, dropped outside the boundary line and immediately dived back in, all while the ball was still in the air! He managed to grab the ball in a one-handed attempt just as it was about to hit the ground. IPL had never seen such a thing of beauty till that game and Hussey gave the Indian Premier League on of its trademark moments. 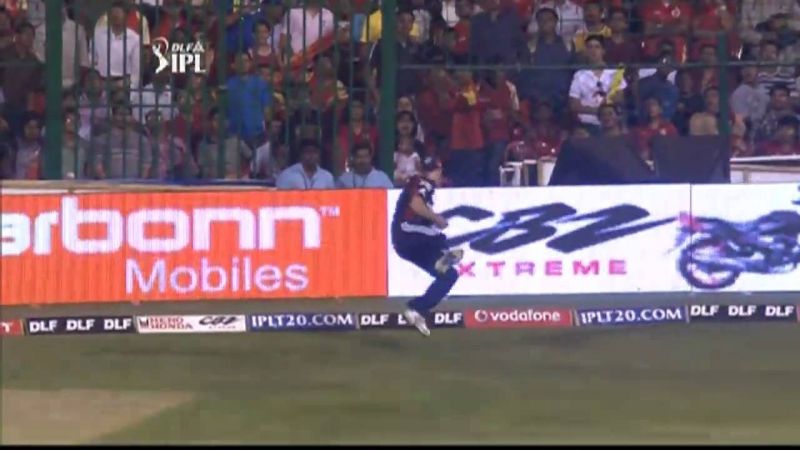 AB de Villiers was a part of the Delhi team facing Royal Challengers Bangalore in the 2010 edition of the IPL and Delhi were already winning the game when he provided a piece of entertainment that would be the highlight of the game for years. De Villiers was already one of the leading fielders of the world but what he showcased on that day would forever remain etched in the spectator’s eyes. Praveen Kumar was batting for Royal Challengers Bangalore and he hit Umesh Yadav to long-on in what looked like a definite six. But De Villiers had other ideas. He leaped straight up right at the boundary line, stretching himself to the limit that is humanly possible, to reach the ball. He managed to catch it with one hand and fell straight down with the boundary within inches.