“India lifts the World Cup after 28 years”, upon hearing Ravi Shastri’s announcement from the commentary box, the whole team had tears of joy in their eyes. Sachin Tendulkar came out on the ground with a smile on his face, realizing that his dream of lifting the world cup for the country had finally turned into a reality. 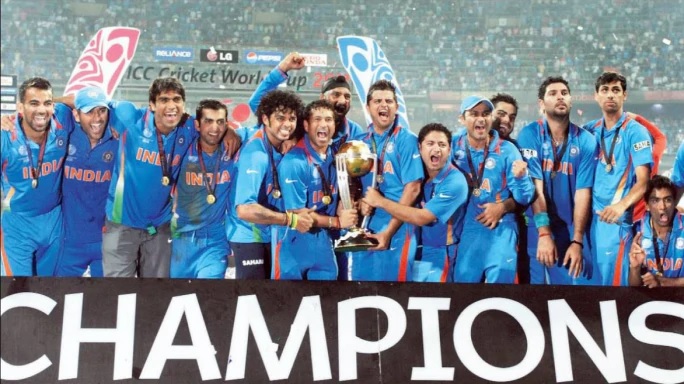 Indians rejoiced and celebrated the glorious victory of Team India, as the whole nation had been yearning to hear these words till the Men in Blue conquered the 2011 World Cup Tournament and gifted the title to the country. It was on this day when the historical event happened at the Wankhede Stadium, Mumbai. The Indian team played their final match for the title against Sri Lanka and defeated them by 6 wickets.


Team India had played a phenomenal game, losing just one match in the entire tournament.

The finale was a terrific match between India and Sri Lankan. The Sri Lankan team, captained by Kumar Sangakkara batted first and set up an impressive target of 274 runs at a loss of 6 wickets. As soon as team India started playing their innings, they lost both of their explosive openers, Sachin Tendulkar and Virendra Sehwag, under just 20 runs. This was a huge blow to the team as they had a very difficult start, losing the best duo. But the Gautam Gambhir stepped in smashing an insuppressible 97 runs and with an unbeatable partnership of 109 with MS Dhoni, took the country to the top. Dhoni finished the match with a beautiful sixer and the team emerged triumphant in the 48th over. He was named as the Player of the Match.

This eventful victory was crowned on India after 1983, the first ODI World Cup win by the country under the captaincy of Kapil Dev.

“Things end but memories last forever. Remembering the rush, excitement, thrill of it all, of the fantastic moments leading up to us lifting the world cup. Irreplaceable. Unforgettable. Thankful to have been a part of this iconic moment in the history of cricket. #worldcup2011”

Things end but memories last forever. Remembering the rush, excitement, thrill of it all, of the fantastic moments leading up to us lifting the world cup. Irreplaceable. Unforgettable. Thankful to have been a part of this iconic moment in the history of cricket. #worldcup2011 pic.twitter.com/qIISLuzS0k