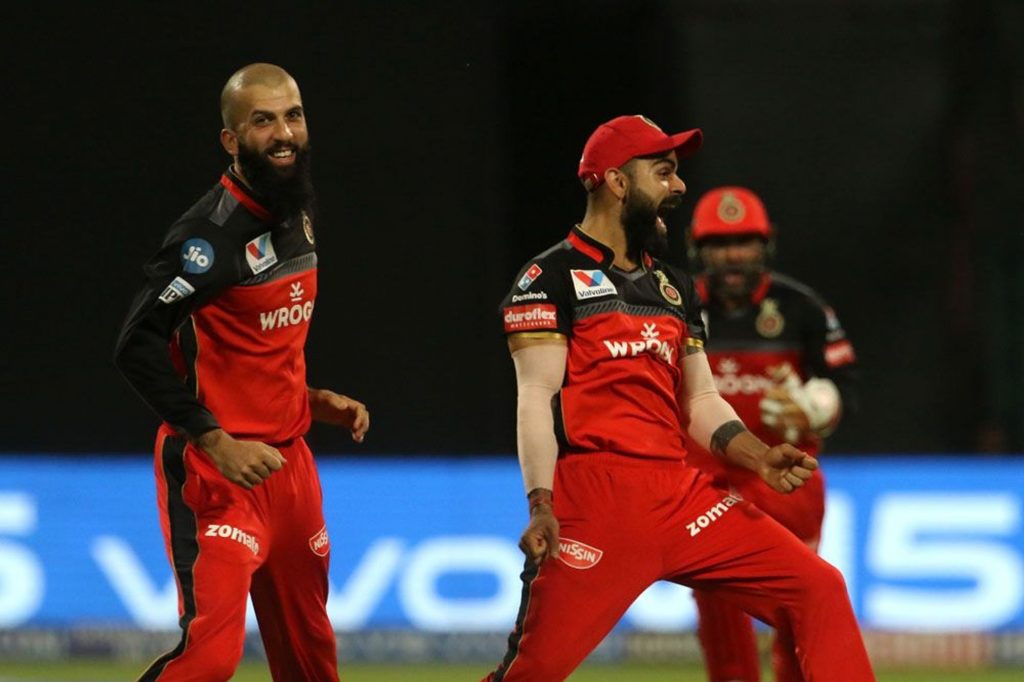 Chasing a daunting 202 run total, Chris Gayle couldn’t play a big inning, who became RCB’s first scalp after his 10-ball 23 run cameo. Gayle, nevertheless, had given Kings the start that they were looking for, as KL Rahul and Mayank Agarwal consolidated further into the innings. The duo added 61 runs for the second-wicket before Agarwal was caught at by Chahal in the 10th over. Lokesh Rahul followed him in the next over, as KXIP were in all sorts of trouble, having lost all three top batsmen inside eleven overs.

Nicholas Pooran and David Miller did bring Kings XI back into the contest with the latter playing a valiant knock of 46 off 28 balls. He struck three sixes to Nicholas Pooran and two sixes off Ali in the next over to once again bring the match in the balance.

But, the last four overs from the seamers sealed RCB’s win, eventually winning the match by 17 runs. Navdeep Saini picking up Nicholas Pooran in the 19th over which seemingly ended KXIP’s chances as they fell short of batsmen to take them home on Wednesday.

Earlier, AB De Villiers put on a show in the first innings to take RCB to a mammoth 202 against Kings Eleven. As many as 64 runs were collected in last three overs, AB De Villiers and Marcus Stoinis hammered Hardus Viljoen and Mohammad Shami to all around the ground.

It was a forgettable evening for Kings’ seamer, with Viljoen and Shami combined for 104 runs in as many as eight overs.

Royal Challengers Bangalore started off well, scoring 35 runs in first three overs before skipper Virat went back to the pavilion in the Shami’s first ball of the fourth over. Wicket-keeper Parthiv Patel continued his good form, smashing seven fours and two sixes in his 43-run knock off 24 balls. Moeen along with De Villiers collected 35 more runs, taking the total to 70 in the power play overs.

Though, post power play runs dried up for the Bangalore after that even as wickets kept tumbling in regular intervals, as RCB total could reach 109 in 14 overs, courtesy some brilliant spin bowling display by the KXIP duo of Murugan Ashwin and Ravi Ashwin.

While cricket pundits were expecting RCB to end their innings between 160 and 170, AB De Villiers and Marcus Stoinis had other ideas. De Villiers and Stoinis put on a 91-run partnership to finish with 202 in the end.

.@ABdeVilliers17 treated us to his range of 360 degree shots in a knock of 82* (44) to walk away with the Man of the Match award?#RCBvKXIP pic.twitter.com/zwarv8RsHu