Who can forget the verbal duel between Virat Kohli and Gautam Gambhir in a match between Kolkata Knight Riders and Royal Challengers Bangalore during IPL 2013 that took every fan by surprise? 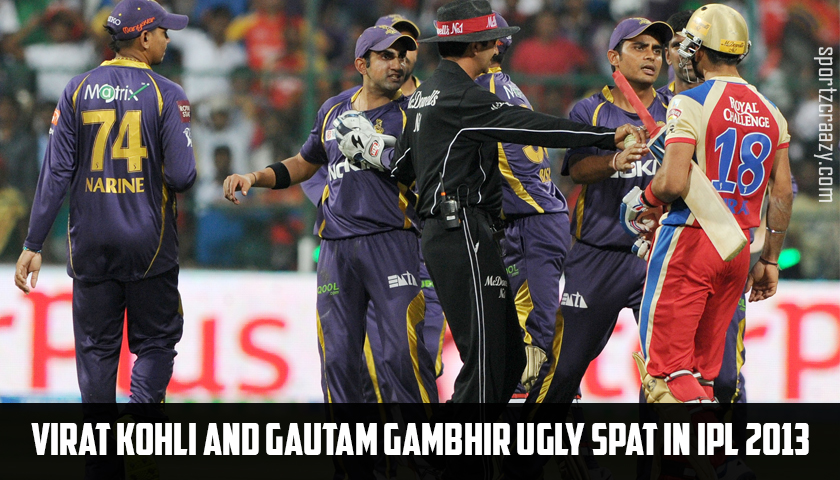 Virat Kohli and Gautam Gambhir Ugly Spat:- The entire incident started after the first delivery of the 10th over, Kohli, who had already hit 2 sixes in the Pradeep Sangwan overlooked in for a big knock but was caught in the covers.

As the players ran towards the cover region celebrating the wicket, furious Kohli instead of walking back to the pavilion rugged back towards team hurdle and made a nasty remark.

Suddenly Gambhir was spotted walking towards Virat Kohli angrily fusing all filthy language possible, but the Delhi lad Rajat Bhatia intervened in between and tried to calm the nerves. During 2013 both Gautam Gambhir and Virat Kohli were not only playing together for the Delhi state Ranji team, North Zone, but were also an integral part of the national team.

Virat Kohli and Gautam Gambhir Ugly Spat:- Although, post-match the matters was shrugged stating it as the spurred heat in a moment. Both the captains were sentenced to Level One offense (Article 2.1.4) using offensive, abusive and insulting language during the match.

However a few days later the stale controversy was buried by both the cricketers and the duo played together for the national team in 2016 and still share a great rapport between them.

Watch Here the Sledging Between Virat Kohli and Gautam Gambhir