Bangladesh has been in sublime form throughout this season. They have won all of their games and finished the group stage as table topper of Group A. In their semi-final match, Bangla Tigers convincingly slammed Afghanistan to continue their winning momentum. Soumya Sarkar, as expected, was the hero of the match. The inform all-rounder initially scalped 3 wickets to restrict Afghani to mere 228 and then smashed quick 61 runs to ensure Finals ticket.

With 4 wins on a trot, Pakistani team are too unbeaten in this tournament. They enjoyed mammoth victory in all of their group matches. But had to sweat hard to stun Indians. Chasing 268, Indian team were once at comfortable position on 211 with 7 wickets in hand. But with the tag of unpredictability, the men-in-green roared back with pulling a stunner at very last moment. Pakistan won the game by 3 runs and confirmed their ticket for final nights. With both sides unbeaten till now, a tight cricketing encounter is expected in Finals.

The awaited finals of ACC Emerging Teams Asia Cup 2019 between Pakistan Emerging and Bangladesh Emerging is scheduled to take place on 23rd November at Shere Bangla National Stadium in Dhaka. The match will commence from 8:30 AM (IST) onwards. Live Streaming not available in India. Scoreboard details will be available on Official Websites.

Rohail Nazir, the skipper of Pakistani side, has done a good job till now. With 35 runs in last match, Nazir has strucked 189 runs thus far. The young lad has consistently score over 30’s in every match but hasn’t played a daddy knock yet. Under the added responsibility of captaincy, Nazir is expected to go big in the Finals.

Soumya Sarkar is the inform batsmen for Bangladesh. The experienced campaigner has scored 84 and then 73 runs in first two matches followed by a matching winning knock of 61 in semi-finals. With 3 wickets in semis, the stalwart has proved his ability with ball too. Sarkar is expected to give a final touch to all his efforts in the Finals.

Nazmul Hossain Shanto is the Bangladesh leading run getter in the ongoing tournament. Shanto played a cracking knock of 59 the other night. With 234 runs to his name, Shanto is the must pick for any fantasy side. 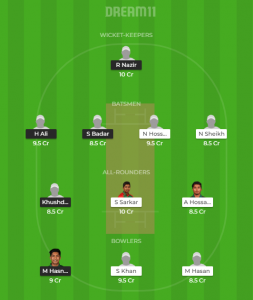