DEG vs NOR Dream11 Prediction:

Deccan Gladiators has been at their best in the ongoing season. After starting the tournament with a loss against Delhi Bulls, Gladiators bounced back with three straight wins to clinch the top spot. After playing a draw against Team Abu Dhabi, Gladiators will look on to grab another one to march into the knockouts with supreme confidence. Gladiators now has 7 points in 5 matches on the back of lethal bowling performance by Pretorius and some excellent batting display from skipper Shane Watson supported by Mohammad Shahzad.

On the contrary, the defending champions, Northern Warriors finds themselves in a do-or-die encounter on Thursday. Warriors has been on and off this season. After starting the season on a high with 9 wickets win against Maratha Arabians, the defending champions were brutally crushed by Qualandars who handed them a 66 runs defeat in their very next match. Despite Warriors inconsistency, Andre Russell has been the tournament stand-out performer in all departments.

DEG vs NOR Squads:

DEG vs NOR Lineups

DEG vs NOR Best Players

Widely known as White Shark, Shane Watson delivers for every team he plays. Same is the case with Gladiators. The Australian veteran has amassed 129 runs with a strike rate of 168. With consistency being the key, Watson is expected to go big even in this match.

Migael Pretorius has been exceptional with the ball. The 24-year young lad has scalped 4 wickets in just 3 matches with an economy of just 8 in a T10 league. It’s said that batsmen wins you matches, while bowlers wins you tournament. Pretorius seems to justify the statement.

Andre Russell has been in the form of his life in last one year. Starting his fireworks in IPL, DreRuss is now tearing off every bowlers that he faces. The Caribbean all-rounder has amassed 159 runs and with 5 wickets to his name, Russel is the most valuable player of the tournament.

Nicholas Pooran is the second leading run-getter in T10 history with 400 runs under his belt. Pooran is an innovative destructive batsmen, who can play shots all over the park as per his will. With 64 runs in two matches, Pooran seems to support Russel to carry his team to knockouts.

DEG vs NOR Dream11 Team 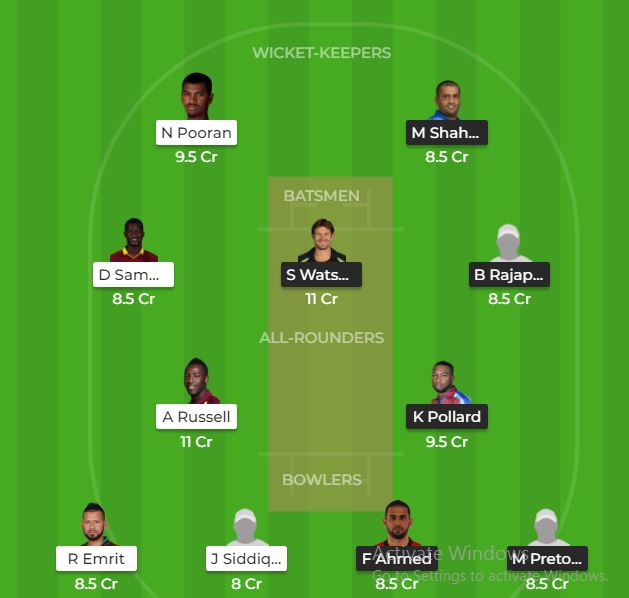